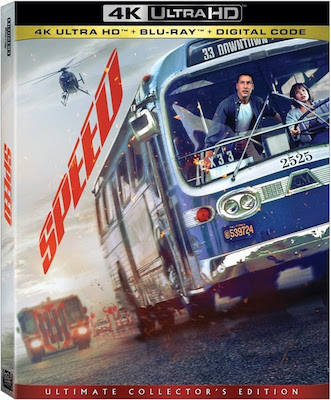 Jan de Bont’s 1994 action thriller Speed is motoring to 4K Ultra HD for the first time, and despite the old tech (ubiquitous cell phones would have changed so much in these films!), it looks like it came out yesterday. Keanu Reeves and Sandra Bullock, whose stars both soared after this fast-paced hit, are restored as fresh-faced ingenues with a makeover by the picture upgrade.

In the film, originally released by Fox, Reeves stars as an L.A.P.D. SWAT team specialist who is sent to diffuse a bomb that a revenge-driven extortionist (Dennis Hopper) has planted on a city bus. But until he does, one of the passengers (Bullock) must keep the bus speeding through the streets of Los Angeles at more than 50 miles per hour — or the bomb will explode.

The plot of Speed is so familiar and satirized that it’s easy for forget that it is a heart-stopping thrill ride. Viewers will relish a return to the kind of pure popcorn-movie fun that existed in the 1990s before 9/11 and other dark events. Speed came out of a time when the biggest threat seemed to be a ruthless terrorist out for money, and the body count could be counted on one or two hands. The aim of this era of films was to send the viewer on a rollercoaster ride with twists and turns and, particularly in the case of Speed, accelerated action.

So, the point of Speed isn’t to think too much — plot holes and physics-defying scenes abound — but to sit back and go along for the ride. And it’s a fun ride that looks better than it has since its theatrical release due to this 4K upgrade.

The commentaries by de Bont and Yost and Gordon were obviously recorded for the DVD release just after 9/11, as they make reference to the horror that recently occurred in New York City. Despite their vintage origin, the commentaries have a nostalgic feel that still rings true today, as they note that bigger threats are happening in the real world. Poking fun at some of the dialog and effects, they outwardly wonder if films like Speed will be made in the future. Viewers, too, might wax nostalgic for a time when cell phones were the size of bricks, Sandra Bullock and Keanu Reeves were young up-and-comers, a bunch of American strangers could actually work together, and the biggest threat was one madman, rather than many.