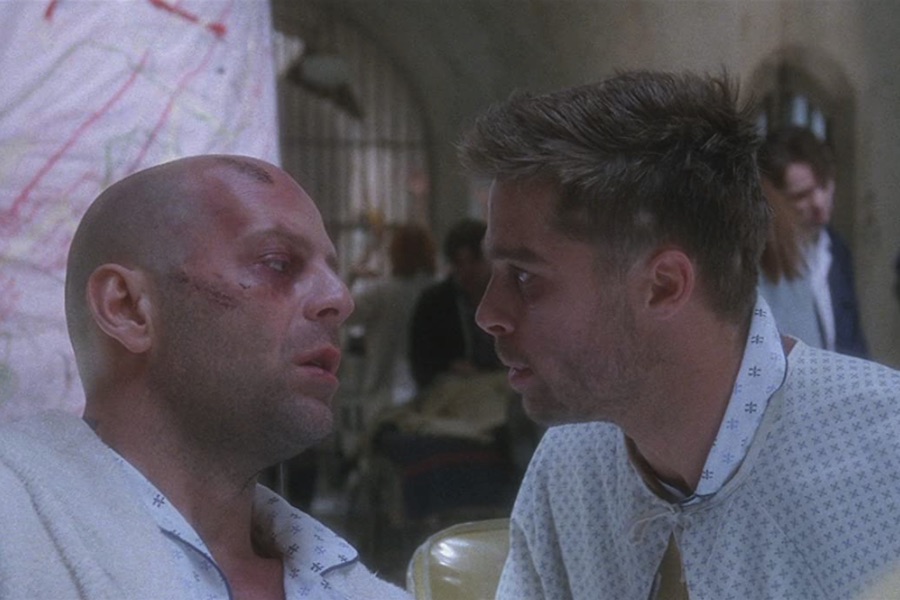 The spaghetti Western Django on 4K Ultra HD and the sci-fi title 12 Monkeys are in the next batch of titles coming to Blu-ray Disc from Arrow Video and MVD Entertainment Group. 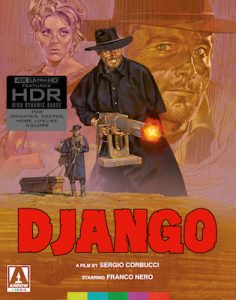 Due June 1 is the 1966 spaghetti Western Django — the inspiration for the Oscar-winning Quentin Tarantino movie — on 4K Ultra HD for the first time with Dolby Vision. Franco Nero stars as Django, a mysterious loner who arrives at a mud-drenched ghost town on the Mexico-U.S. border, ominously dragging a coffin behind him. After saving imperilled prostitute Maria, Django becomes embroiled in a brutal feud between a racist gang and a band of Mexican revolutionaries. With Django, director Sergio Corbucci upped the ante for sadism and sensationalism in Westerns, depicting machine-gun massacres, mud-fighting prostitutes and savage mutilations. Django’s brand of bleak nihilism would be repeatedly emulated in a raft of unofficial sequels. Also included in the set is Texas, Adios on Blu-ray, which also stars Nero, and was released as a sequel to Django in some countries. Extras include six double-sided collector’s postcards, a double-sided fold-out poster, a 60-page bound book featuring writing by Howard Hughes and Roberto Curti and original reviews, and a reversible sleeve featuring original and newly commissioned artwork by Sean Phillips. Special features on the Django disc include audio commentary by film critic, historian and theorist Stephen Prince; “Django Never Dies,” an interview with Nero; “Cannibal of the Wild West,” an interview with assistant director Ruggero Deodato; “Sergio, My Husband,” an interview with Corbucci’s wife Nori Corbucci; “That’s My Life: Part 1,” an archival interview with co-writer Franco Rossetti; “A Rock ‘n’ Roll Scriptwriter,” an archival interview with co-writer Piero Vivarelli; “A Punch in the Face,” an archival interview with stuntman and actor Gilberto Galimberti; “Discovering Django,” an appreciation by spaghetti westerns scholar Austin Fisher; an Introduction to Django by Alex Cox, an archival featurette with the acclaimed director; a gallery of original promotional images from the Mike Siegel archive; and original trailers. The Texas, Adios Blu-ray also has several special features. 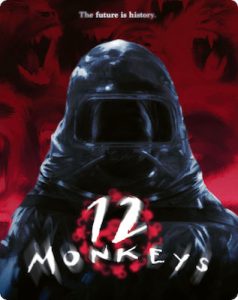 Available May 25 is 12 Monkeys in a Blu-ray Steelbook limited edition. Following the commercial and critical success of The Fisher King, director Terry Gilliam’s next feature would turn to science fiction and a screenplay by Janet and David Peoples (Blade Runner, Unforgiven) inspired by Chris Marker’s classic short film La Jetée. In the film, in 1996, a deadly virus is unleashed by a group calling themselves the Army of the Twelve Monkeys, destroying much of the world’s population and forcing survivors underground. In 2035, prisoner James Cole (Bruce Willis) is chosen to go back in time and help scientists in their search for a cure. The film features an Oscar-nominated turn by Brad Pitt (Fight Club) as mental patient Jeffrey Goines. Special features include audio commentary by Gilliam and producer Charles Roven; “The Hamster Factor and Other Tales of Twelve Monkeys,” a feature-length making-of documentary by Keith Fulton and Louis Pepe (Lost in La Mancha); “The Film Exchange with Terry Gilliam,” a 1996 interview with Gilliam and film critic Jonathan Romney, recorded at the London Film Festival; an appreciation by Ian Christie, author of Gilliam on Gilliam; “The Twelve Monkeys Archives”; the theatrical trailer; limited-edition steelbook packaging featuring newly commissioned artwork by Matt Griffin; and a limited edition booklet featuring writing on the film by Rabin and an excerpt of Gilliam on Gilliam by Christie. 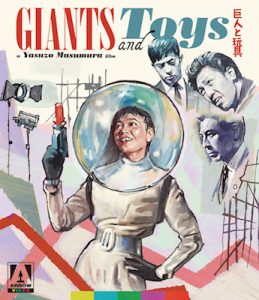 The 1958 Japanese comedy Giants and Toys debuts on Blu-ray May 11. The corporate satire revolves around the ruthless machinations of a group of admen working in the confectionary industry. Its absurdist and acidly cynical take on the excesses of the media and advertising worlds presents a garish vision of a bold new postwar Japan where traditional company values come head-to-head with American-style consumer capitalism. As a new recruit to the marketing department of World Caramel, fresh-faced graduate Nishi is eager to impress his ambitious and hard-nosed boss Goda, even if it strains his relationships with his college friend Yokoyama and new love interest Masami, who work at the rival companies of Giant and Apollo. With World’s lead over its competitors slipping badly, the two spot a chance to get back in the race in the shape of the pretty but unsophisticated 18-year-old, Kyoko. The two get to work polishing this rough diamond as their new campaign girl, but as the three rival confectionary companies pitch themselves into an all-out advertising war that spills out onto the streets of Tokyo as it escalates to ludicrous extremes, Kyoko’s newfound fame starts going to her head. With the pressure mounting within the hothouse environment of World’s boardroom, it soon becomes clear to Nishi that the Goda has sold out more than just his family in the name of corporate advancement. Making its worldwide Blu-ray debut, this adaptation of the award-winning 1957 novel by Ken Kaiko is considered a landmark in Japanese film history and a key work by Yasuzô Masumura (Blind Beast, Red Angel), one of the country’s most acclaimed directors of his generation. Special features include a new audio commentary by Japanese cinema scholar Irene González-López; a newly filmed introduction by Japanese cinema expert Tony Rayns; “In the Realm of the Publicists,” a new visual essay by Asian cinema scholar Earl Jackson; an original trailer; a reversible sleeve featuring original and newly commissioned artwork by Tony Stella; and, for the first pressing only, an illustrated collectors’ booklet featuring new writing by Michael Raine. 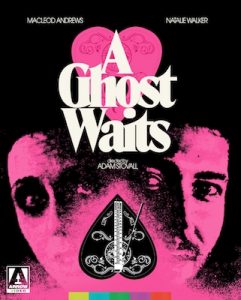 Available now on Blu-ray is the comic horror film A Ghost Waits (2020), winner of Best Picture, Best Director and Best Actor at Frightfest & Screamfest 2020, from first-time writer/director Adam Stovall and producer/star MacLeod Andrews. Tasked with renovating a neglected rental home, handyman Jack (Andrews) quickly finds out why the tenants keep leaving in droves — this house is haunted. The ghost in question is Muriel (Natalie Walker), herself employed from beyond the veil to keep the home vacant. Against the odds, Jack and Muriel find they have a lot in common. Having found a kindred spirit in an otherwise lonely existence, they must fight for their newfound affection as pressure mounts for them each to fulfill their “cross-purposes.” Special features include audio commentary by writer/director Stovall; audio commentary by Stovall and Andrews; audio commentary by the cast and crew; “Humanity and the Afterlife in A Ghost Waits,” a new video essay by Isabel Custodio exploring the film’s themes and cinematic forebears; eight interviews with cast and crew; an interview and post-film Q&A with Stovall moderated by Alan Jones at Frightfest Glasgow 2020; outtakes; Easter eggs; the theatrical trailer; an image gallery; a reversible sleeve featuring original and newly commissioned artwork by Sister Hyde; and, for the first pressing only, an illustrated collectors’ booklet featuring new writing by Craig Ian Mann.