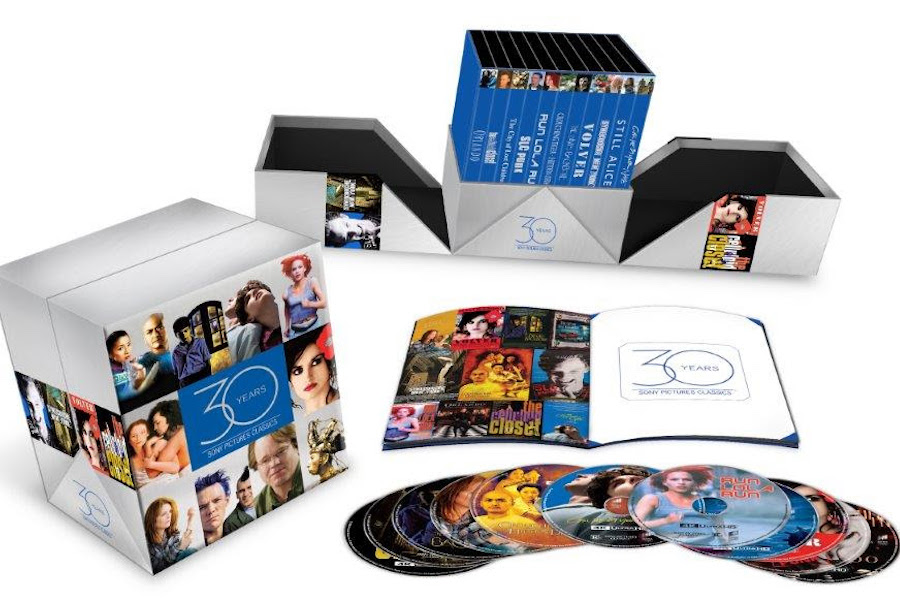 While Crouching Tiger, Hidden Dragon returns to 4K Ultra HD with Dolby Vision, the other 10 films in the collection are only available on 4K Ultra HD disc within this special limited-edition collector’s set. Also included within the collection is a 24-page booklet, featuring a new essay from film critic David Thomson about the history of Sony Pictures Classics, along with information about each of the included films and an introduction from SPC co-presidents Tom Bernard and Michael Barker. Finally, the set includes hours of archival special features across the 11 films, plus a few newly added materials.

Orlando stars Tilda Swinton and Billy Zane in a hip, sexy and wickedly funny look at an English nobleman who defies the laws of nature and comes back to life as an English noblewoman.

The Celluloid Closet, narrated by Lily Tomlin, is a hundred-year history of gay men and women on the silver screen.

The French film The City of Lost Children, from Jean-Pierre Jeunet, the director of Amelie and Delicatessen, is a fantastically twisted fairy tale chock-full of curious characters, spectacular stunts and unforgettable visuals.

In SLC Punk, it’s 1985 and Stevo is that rare animal: a punk rocker in the Mormon stronghold of Salt Lake City, Utah. He just graduated from college with honors and now his life is a nutty roller coaster ride of rock shows, stealing cars, beating up rednecks and non-stop partying with his buddy, Heroin Bob, and his girlfriend. But with the scene getting lame and Stevo going nowhere fast, he has to put his punk ideals to the test.

Crouching Tiger, Hidden Dragon is an epic set against the breathtaking landscapes of ancient China that combines the exhilarating martial arts choreography by Yuen Wo-Ping (The Matrix) with the sensitivity and classical storytelling of an Ang Lee film.

In the Spanish film The Devil’s Backbone, with his father killed in the brutal fighting of the Spanish Civil War, 10-year-old Carlos is sent to live at the desolate Santa Lucia School, now a makeshift shelter for war orphans. Soon after his arrival, Carlos has a series of seemingly supernatural encounters: strange shadows, voices and, most frightening of all, the apparition of a brutalized young boy. It turns out that Carlos is not alone in seeing these strange phenomena.

In the Spanish Volver, Academy Award-winner Pedro Almodóvar (2003, Best Original Screenplay, Talk to Her) directs a comedic and compassionate tribute to women and their resilience in the face of life’s most outrageous tribulations. Penélope Cruz leads an ensemble of gifted actresses, including Carmen Maura (Women on the Verge of a Nervous Breakdown). In the film, Raimunda (Cruz) and her sister Sole lost their parents in a tragic fire years ago. But superstitious villagers claim that the girls’ departed mother Irene (Maura) has been seen wandering around their Aunt Paula’s home. When Irene appears to Sole, she explains that she has returned to set right her daughters’ troubled lives and reveal shocking secrets that will impact everyone.

Synecdoche, New York is a philosophic adventure from Charlie Kaufman. In the film , theater director Caden Cotard (Philip Seymour Hoffman) is mounting a new play. His life catering to suburban blue-hairs at the local regional theater in Schenectady, New York, is looking bleak. His wife Adele (Catherine Keener) has left him to pursue her painting in Berlin, taking their young daughter Olive with her. His therapist Madeleine Gravis (Hope Davis) is better at plugging her best-seller than she is at counseling him. A new relationship with the alluringly candid Hazel (Samantha Morton) has prematurely run aground. And a mysterious condition is systematically shutting down each of his autonomic functions, one by one. Worried about the transience of his life, he leaves his home behind. He gathers an ensemble cast into a warehouse in New York City, hoping to create a work of brutal honesty. He directs them in a celebration of the mundane, instructing each to live out their constructed lives in a growing mockup of the city outside.

Still Alice stars Julianne Moore as Alice Howland, who is happily married with three grown children and is a renowned linguistics professor who starts to forget words. When she receives a diagnosis of early-onset Alzheimer’s disease, Alice and her family find their bonds thoroughly tested. The film also stars Alec Baldwin, Kristen Stewart, Kate Bosworth and Hunter Parrish.

Call Me by Your Name is set amid the summer splendor of 1980s Italy where Elio and Oliver discover the heady beauty of awakening desire that will alter their lives forever.