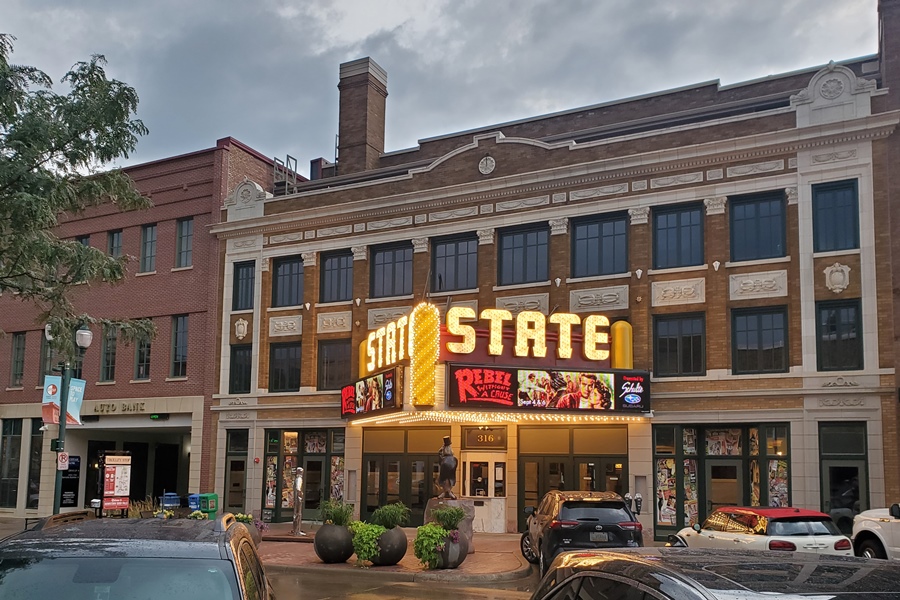 It was a fiscal homerun for the pandemic-challenged exhibition business.

Meanwhile, at the single-screen Avery Theater in Garner, Iowa, (population 3,059) about 92 mask-less parents and their children Sept. 3 purchased $4 tickets ($3 for kids) to see the local debut of Paramount Pictures’ Paw Patrol: The Movie — the adventure animation comedy that bowed nationwide Aug. 20.

“It helps keep prices down,” Lu says. She, and the other volunteers get free snacks, in addition to a movie for their community service.

Working his first solo shift as the Avery’s part-time assistant manager, the twenty-something employee is relieved that nearly half of the 90-year-old theater’s seats sold for Paw’s local debut.

It’s a script the 100-odd single-screen movie theaters still operating across America embrace to survive in a media ecosystem increasingly saturated by streaming.

Small-town theaters provide a link to a bygone era before television (and air conditioning) that offered sanctuary on a hot summer day, a social gathering spot as important as the post office, city hall, the bowling alley and church.

“We need more places in this country right now where we can come together and share space with one another and breath the same air. Those places in modern society are disappearing,” Kristina Smith, owner the 350-seat single-screen Callicoon Theater in upstate New York, told the Associated Press. “You’ve got your town hall. You’ve got church. And, sometimes, you have your local movie theater.”

To maintain that legacy, local theaters are pursuing incremental revenue sources such as social media fundraising, donation jars and live events to keep the lights on.

“After 90 years of performances, conferences, lectures and musical entertainment, the historic Fox Theatre must move into the 21st century,” reads the North Platte theater’s website. The venue seeks to raise $500,000 to make the Fox Theatre “the place in our community to experience drama, music and intellectual fulfillment.”

Last year during the height of the pandemic, when movie theaters faced an uncertain future, Alamo Drafthouse Cinema, a chain of 40 independent screens based in Austin, Texas, got lucky. The company emerged from Chapter 11 bankruptcy after securing a sale to a private equity group.

“It’s incredibly exciting to be back on that path so we can bring the Alamo Drafthouse experience to new locations around the country, including our very first [screens] in Manhattan, N.Y., St. Louis and Washington, D.C.,” new CEO Shelli Taylor said in a statement.

Separately, distributor Kino Lorber bowed an online platform that allows moviegoers to support their local indie theater through the purchase of VOD movies.

“Those first theaters [earned] real numbers — they were thousands of dollars, not hundreds,” CEO Richard Lorber said in a media interview. “They were a meaningful indication that there was a customer base that was willing to pay, and theaters are sharing [in] approximately 50% of the revenue.”

While most small theaters can’t bank on a hedge-fund lifeline, just as many don’t have have the resources required to operate a website, let alone over-the-top video distribution.

Take the 500-seat Forest Theatre in Forest City, Iowa (pop. 3,928). According to its Facebook page, the venue was originally built in early 1910’s as an opera house. “The Forest” is now owned by the city and operated by a community board.

H.P. Kobriger handles ticket sales, concessions and digital projection as a side gig. He works fulltime as a financial aid counselor at nearby Waldorf University. Kobriger says The Forest — like most theaters — re-opened in July after a 17-month shutdown due to the pandemic.

“It’s been a challenge re-educating people to think about going out to the movies again,” he says.

Indeed, a recent Tuesday night screening saw just three customers, appropriately watching A Quiet Place Part II — the Paramount Pictures sequel that hit theaters nationwide back in May. The Forest is looking to split into a two-screen venue to double movie options. A crowdsourcing effort to fund construction has thus far generated about $1,440.

In the meantime, the venue, unlike most single-screen operations, operates six-days a week, and bowed Shang-Chi concurrently with the film’s nationwide debut — a marketing win for Kobriger.

Former Kiester Mayor Doug Trytten and wife bought the Kee Theatre in 1986, complete with the original Art Deco neon marquee. They sold it to a nonprofit in 1990 and became board members.

“We just don’t get the crowds that we used, [but the Kee] is still important to our community,” Trytten says.

After re-opening in July, the board decided to downsize expenses, screening one movie over a three-day period during the last weekend of the month.

“We didn’t know what would happen with this Delta variant, so we opted to be conservative about opening all month,” he says.

The theater, like others, has been digital since 2012, when studios stopped sending out 35-millimeter movie reels. The venue now sports a Barco 2K cinema projector with 4,000-watt lumens, 7.1 Dolby sound processor and a 3 Terabyte Dolby server.

“You basically get a Blu-ray Disc [from the studios] and plug it in, which is slick,” Trytten says. “I like that.”

Trytten says he used to get paid $25 weekly as “digital cinema manager,” and now chuckles that his “pay” has been reduced to monthly.

“We pay the concession people, usually high-schoolers or young people. And we have a cleaning lady, but of course, everybody’s hours are shorter,” he says.

Trytten thought the transition to digital would reduce the Kee’s monthly overhead. It didn’t. Studios still charge the same $250 weekly rental fee. For example, the Kee only gets access to a Disney movie three weekends after major exhibitors. That’s because the studio mandates exhibitors screen a Disney/Marvel/Pixar title for a minimum 17 consecutive days, which conflicts with The Kee’s operating schedule.

“Movie companies are basically dictators,” Trytten says. “We always figured when we went to digital, we would get a big discount on the rental price. But no, they’re greedy.”

The 67-year-old doesn’t know if the Kee will make it financially, but, because of its nonprofit status, he is hopeful the venue can break even. Trytten says the fiscal goal is largely dependent on what movies the Kee showcases.

“Most of the time we don’t get movies that interest people,” he says. “Mediocre movies in a large city will probably break even or make money. But not here.”

“I hired this guy back in 1986, and he’s been our [movie] booker ever since,” Trytten says, adding that Disney’s delayed releases to smaller venues amounts to a “penalty.”

“We pay a price because a lot of people who wanted to see Jungle Cruise have already seen it. But that’s the business option we took,” he says.

“Heck, I’m a cord-cutter. I stream all that stuff too,” he says. “What is the appeal of the movie theater? The big screen and Dolby digital sound.”

Trytten says his goal is to keep the Kee going for as long he can. The venue received limited federal assistance during the pandemic, about $3,000 to $4,000, which Trytten says kept the theater functioning through the winter.