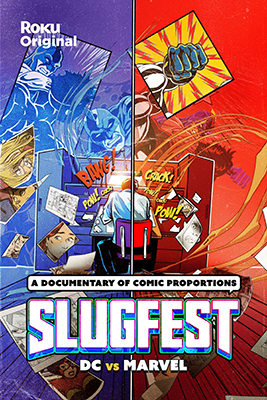 This documentary series executive produced by the Russo Brothers focuses on the decades-long rivalry between comic book publishers Marvel and DC.

The series was originally intended for Quibi, which is why the 10 episodes are each only about seven minutes give or take. It eventually ended up as a Roku Channel original, where it was kept in its episodic form rather than stitched together as a longer, single feature.

The documentary covers many of the key moments in the rivalry, mostly involving the creation of key characters. The retrospective involves a mix of interviews with actors and creators either involved with the companies now or starring in movies based on the comics. Key events are presented as re-enactments using some very well-known actors.

The series kicks off during World War II and the creation of Captain America. Other episodes examine how the two publishing companies tried to outdo each other with marketing efforts and big storylines, such as the “Death of Superman” in the 1990s from DC, which then led to Marvel’s “Spider-Man” clone storyline that spiraled out of control when sales were so good the writers weren’t allowed to end it when they planned.

Several shows also deal with attempts by the companies to do crossovers, be it either surreptitiously through subtle references to common events, or an epic team-up between Superman and Spider-Man. In the 2000s, Marvel legend Stan Lee did a line of books for DC in which he reimagines DC heroes as if he had made them (though, more likely, Lee lent his name to the promotion and gave general ideas that were fleshed out by DC’s regular writers).

The historical vignettes are fun, and fans of these characters will delight in the discussions of aspects of the rivalry, some of which they are familiar, and some they might not have been aware of.

However, the short running times mean a lot of potential topics for presentation aren’t covered, especially with regards to the characters being translated into films and TV shows and the rivalry extending into those mediums, which the documentary barely alludes to otherwise.