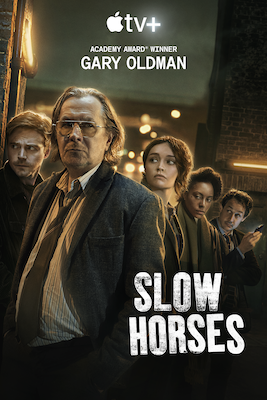 This darkly funny spy thriller series is based on the 2010 novel of the same name and gives Academy Award-lauded star Gary Oldman another shot at playing a grumpy old mentor following his Oscar-nominated turn in Mank and his Oscar-winning performance as Winston Churchill in Darkest Hour.

Needless to say, Oldman has the role of crusty crank down to a science.

He plays Jackson Lamb, the alcoholic ringleader of a band of misfit MI5 agents relegated to Slough House (not-so-affectionately called “Slow Horses”) after they have bungled their spying assignments. The irascible boss Lamb is bent on making their work lives insufferably tedious and pointless until the band of quirky secret agents is unwittingly drawn into a real spy caper involving the MI5 ‘A’ team and its boss Diana Taverner (Kristin Scott Thomas).

Recalling great old spy movies of the 1970s with all their grime and grit — albeit set after the fall of the Berlin Wall — “Slow Horses” succeeds in offering a mystery through-line for its first season (another is on the way) while also introducing characters that keep the viewers’ interest. In addition to Lamb (Oldman) and Taverner (Thomas), we meet River Cartwright (Jack Lowden), the young spy determined to make good, as well as his grandfather and retired MI5 officer David Cartwright (the venerable Jonathan Pryce), among other intriguing personalities. Like any good characters, they are fun to watch and leave viewers wanting to spend more time with them — no matter what the next assignment may be.