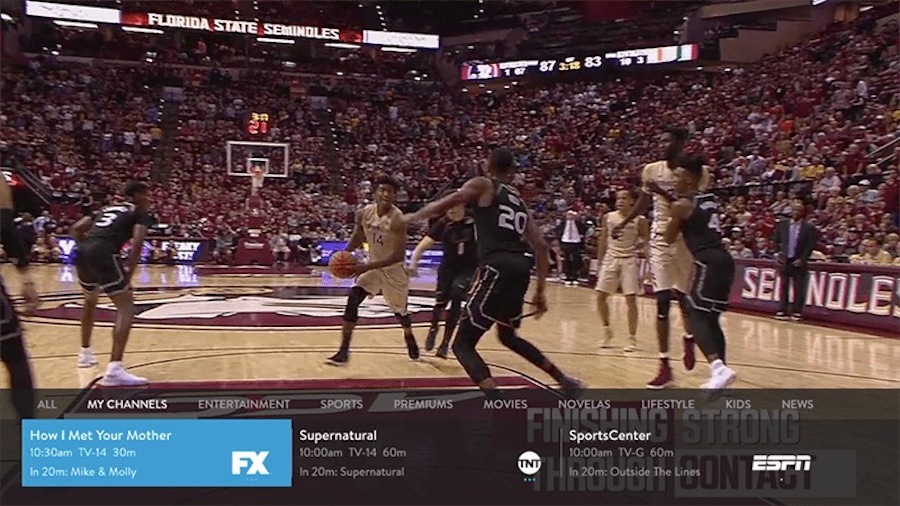 Sling TV has created a new "Micro Guide" on Roku that doesn't take up as much of the screen.

With in-app upgrades, customers can now add extras and premium channels to their account within the app by selecting their desired content from the in-app upgrades ribbon under “Add Channels & More” on the My TV screen.

Customers can now add on-demand channels to MyChannels, including Nat Geo Wild, Fandor, as well as on-demand content from NBC and Fox for Sling Blue customers who do not live in a market where linear content is available.

Favorite channels (indicated by a heart in the guide) are now shown first at the top of the “Grid Guide” and on the left of the “Channel Guide” and the new “Micro Guide.”

The company has reduced the size of the guide (called the “Micro Guide”) that appears while watching a show, so it takes up less of the screen. The full guide is still available by pressing “down” on the remote’s D-pad when watching a title.

When pressing the “Exit” button on the remote, customers will now see a pop-up giving them the option to go back to their show or movie instead of leaving Sling TV.

To aid binge-viewing, Sling TV has updated the player view so when customers are watching an on-demand title, the app will automatically go back to the franchise page of the show they watched.

The changes are detailed on Sling TV’s blog.

“The Richards Group brings to the table a history of successful campaigns, breakthrough creative and a unique set of capabilities necessary to take the Dish brand forward,” Jay Roth, CMO and SVP of Dish, said in a statement. “Throughout the agency review process, Dish and The Richards Group discovered natural synergies between our two founder-led organizations, and we’re eager to bring the results of this partnership to market.”