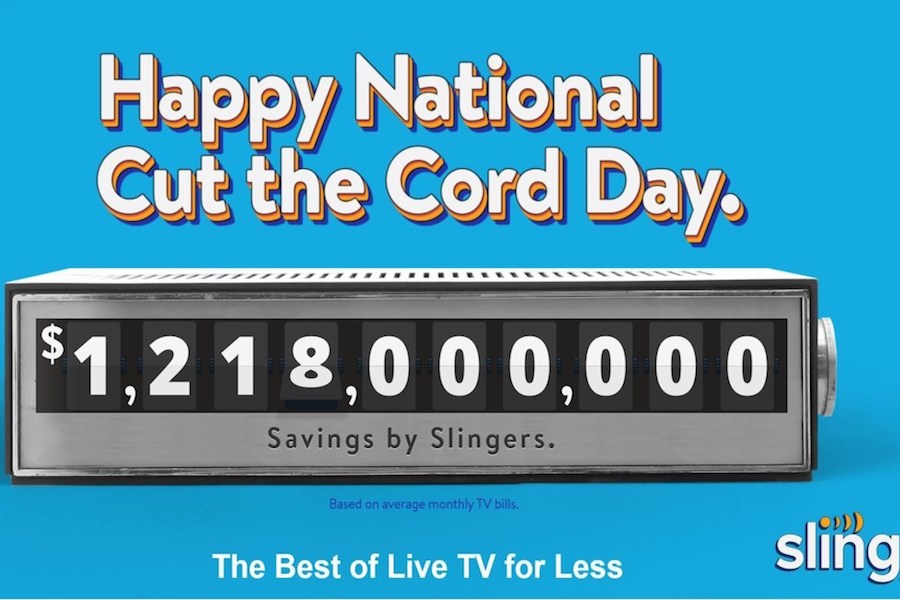 Sling TV announced Feb. 9 is National Cut the Cord Day, to commemorate the service’s fifth anniversary and as part of a five-day celebration with deals available on sling.com Feb. 7-11.

New and returning customers can sign up for one month of discounted Sling TV for $5.

“For the past five years, we’ve been dedicated to making live TV streaming simple, easy and affordable — helping Americans save $1.2 billion through cord-cutting,” said Warren Schlichting, Sling TV group president, in a statement. “National Cut the Cord Day is designed to take away any excuse to cling to cable. We want to help future Slingers find out how easy it is to cut the cord and get started on Sling TV.”

Sling users start with a base service, plus 10 hours of free Cloud DVR ($30 per month), and select any “Extras” they need (starting at $5 each). Users can also add on-demand content from other subscription video on-demand streaming services such as Netflix, Disney+ and Hulu, as well as an over-the-air antenna (OTA) for free access to local broadcast channels.

“Sling TV has pioneered cord-cutting by giving customers only the channels they want and the ability to integrate local channels into the interface for free, saving hundreds of dollars from their cable bill,” Schlichting said in a statement. “So while making the leap from cable to live TV streaming may feel a little daunting at first, it’s easier than you think, and absolutely worth it. Not only is it incredibly easy to get the most popular channels on your favorite devices, Sling TV seamlessly integrates your free local channels for a whole-home solution, when paired with an OTA antenna and AirTV.”

Cut the Cord Day offers include:

Sling TV is also offering new customers a Cord Cutter Bundle to provide full integration of free locals via an OTA antenna, including an AirTV 2, AirTV Mini and OTA antenna for $5 when prepaying for three months of either Sling Orange or Sling Blue at full price (originally $99).

The registrar at National Day Calendar declared National Cut the Cord Day to be observed on Feb. 9, annually, memorializing Sling TV as the first streaming service to deliver live television over-the-top since its Feb. 9, 2015 debut, according to a Sling press release.

As part of National Cut the Cord Day, Sling TV created a Cord Cutter Hotline (855-553-2862) to support people who are thinking about cutting the cord.