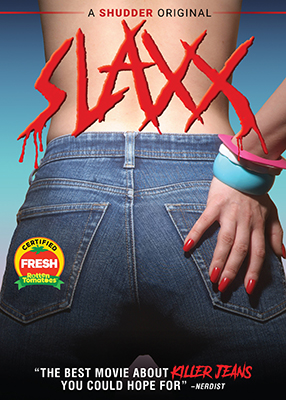 The desire to find the perfect pair of jeans turns deadly in Slaxx, an inventive Canadian horror film with a fun premise tapered by sharp anti-consumerist overtones.

The film focuses on enthusiastic teen Libby (Romane Denis), who gets a job with a trendy clothing store. Her first day involves helping to set up the store overnight before the launch of its new collection, which includes the new “Super Shaper” jeans that are touted to look good on any body type.

After a quick pep talk from the company CEO, the store is locked down for the night to prevent any security leaks. Unfortunately for the employees, the jeans turn out to be made with a genetically modified cotton and possessed with the spirit of an exploited laborer killed while picking it.

So, the jeans come to life and begin a killing spree. But store manager Craig (Brett Donahue) rejects the option of unlocking the store and getting help, thinking it will derail the launch and hamper his ability to earn a promotion within the company. So the surviving employees hatch a plan for how to deal with the literal killer jeans on their own.

Taking its place among the horror sub-genre of murderous inanimate objects, Slaxx with its mix of gore and absurdist humor brings to mind the 2010 film Rubber, about a homicidal tire.

The DVD includes a number of short featurettes about the making of the film.