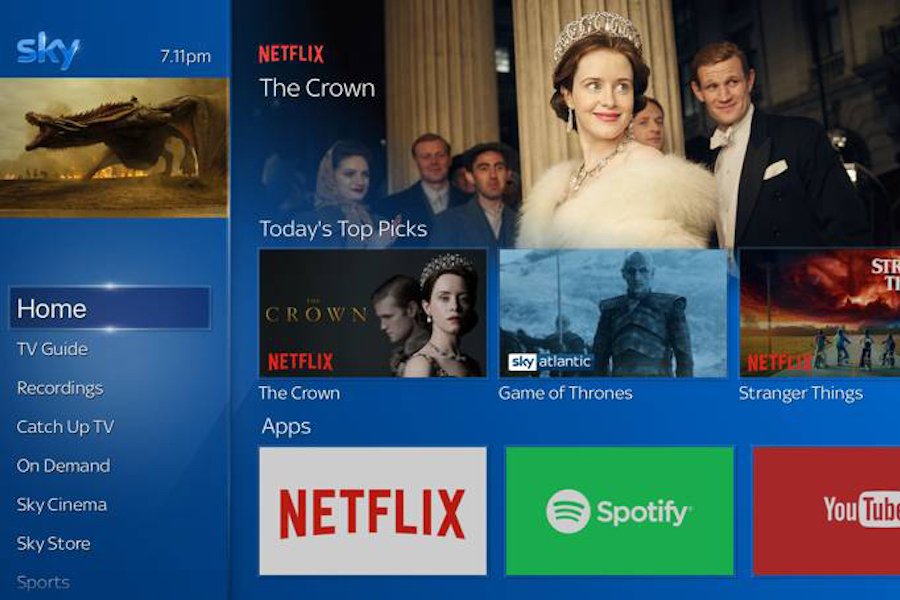 “Sky Ultimate TV” on Sky Q is a £25 ($36) monthly bundle that features every episode of Sky shows and includes access to Netflix.

The enhanced partnership between pay-TV operator Sky and Netflix (which began in 2018) underscores ongoing shifts in consumer video viewing habits.

Netflix through the third quarter last year had more than 11.8 million subscribers in the U.K., according to Statista. That tally is said to have surpassed Sky’s U.K. sub total around 12 million.

Sky Q  subscribers also get live TV, “Catch-Up TV,” BBC iPlayer, ITV Hub and “All 4,” as well as apps from YouTube, Spotify and XITE, among others.

“With the launch of Sky Ultimate TV, all our customers will get the most talked-about shows from Sky TV and Netflix,” Liz Wynn, managing director, Sky TV, said in a statement. “From ‘Save Me’ to ‘The Crown,’ you’ll get all the episodes whenever you want them, all in one place on our award-winning Sky Q box.”

Sky Ultimate TV includes Netflix Basic, but subs can upgrade to Ultra HD and Netflix Premium for an additional £10 ($12.82) a month.

Comcast claims 2020 is set to be the biggest year ever for Sky TV, with 80 Sky originals on air and a 40% boost to U.S. content. This includes the brand new Sky Comedy channel, with Sky Documentaries, Sky Nature and Sky History channels.

Pending Sky originals include thriller “Gangs of London”; “Breeders,” a parenting comedy with Martin Freeman and Daisy Haggard; “Save Me Too,” a British drama from the producers of “Line of Duty” with Lennie James and Suranne Jones and “I hate Suzie,” a drama starring Billie Piper.