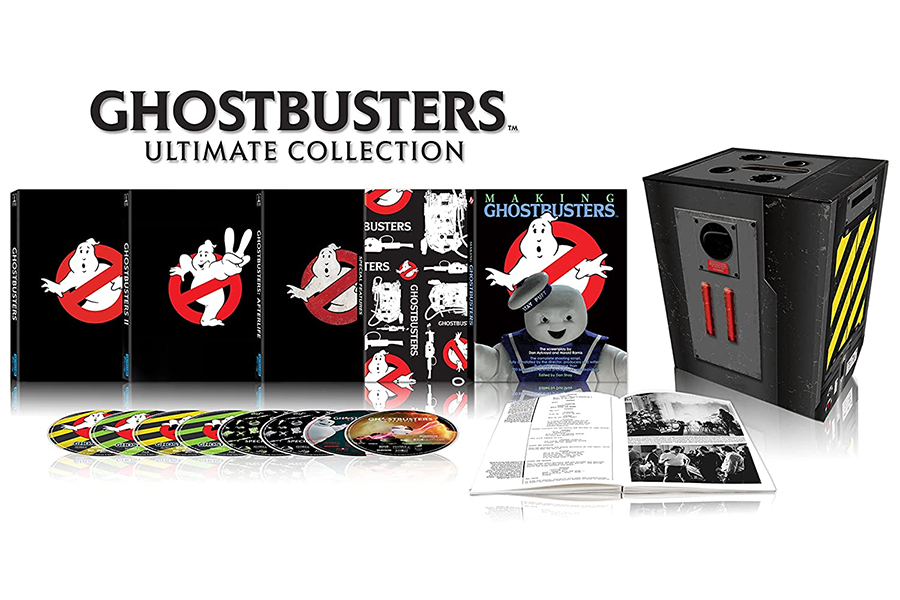 The notion that the 2016 Ghostbusters reboot wouldn’t be included in an upcoming franchise Blu-ray set seems to have touched a nerve in that film’s fans that it somehow isn’t getting the “respect” they think it’s due.

The upcoming Ghostbusters Ultimate Collection Blu-ray/4K set appears to be the trilogy that includes 1984’s Ghostbusters, 1989’s Ghostbusters II and 2021’s Ghostbusters: Afterlife. The first two films were directed by Ivan Reitman, the latter by his son, Jason.

The 2016 film, however, is a reboot directed by Paul Feig, with a story not set in the same narrative continuity as the 1980s films, as Afterlife is. That’s why the 2016 film is sometimes listed with the subtitle of Answer the Call, to distinguish it from the original.

The film takes the setup from the 1984 film — that a group of academics sets up a business to hunt ghosts — and famously recasts the main parts with female comedians, in contrast to the male team of the original cast.

That ATC didn’t continue the story of the first two films was a major complaint of fans, and its lackluster box office performance prompted Sony Pictures and Jason Reitman to start work on a true sequel to the original films, which we got in Afterlife.

Of course, the 2016 film has its supporters who aren’t happy that it’s apparently being swept under the rug, both with the existence of Afterlife and its omission from the Ultimate Collection. The most vocal of these fans have always had an iffy relationship with reality, many of them putting forth the absurd claim that people who don’t like the 2016 film were doing so out of racism or sexism, rather than admitting that it just isn’t very good (though that doesn’t justify some of the horrific social media attacks reportedly made against its cast members).

Answer the Call has a talented cast of female comedians, and the foundation of a decent Ghostbusters story, but the execution is botched. The humor seems forced and out of place, more like Bridesmaids (an earlier Feig comedy) with Ghostbusters cosplay rather than a true “Ghostbusters” movie. And the decision to do a reboot by showing the new characters developing the tech that is already familiar to fans of the franchise just seems disrespectful to the earlier films, especially with when it shoehorns in bizarre cameos from members of the original cast. (Its kind of ironic that fans of ATC are complaining that it’s being dishonored by Afterlife, when ATC dishonored the original films to begin with.)

The simple reality is that the same cast with almost the same plot being connected to the story of the 1980s films would have been embraced by fans. But that wasn’t the direction Feig wanted to go. Franchise co-creator Dan Aykroyd has stated in interviews that Feig ignored advice on how to construct the film, which later resulted in expensive reshoots that ballooned the budget and limited its potential for profitability (it reported lost $70 million for Sony Pictures).

Now, Afterlife is far from a perfect movie. It’s at times almost too reverential to the original films, and its third act is essentially a re-creation of the end of the first film, relying more on nostalgia than originality. But it respects the lore, which is why fans have embraced it over ATC.

Personally, I felt the retread elements of Afterlife really started to wear thin by the end — which actually only made me more mad that Answer the Call existed, since it wasted the core story — the idea of the ghostbusting tech falling into the wrong hands and being used to summon demons — that would have better served Afterlife.

But that’s neither here nor there. What’s done is done and we have the films we got, which is a Reitman trilogy and Feig’s reboot (likened by some on Twitter as a parody rather than an actual “Ghostbusters” film).

What seems to have set off fans of the 2016 film is Sony labeling the trilogy boxed set as the “ultimate” collection, as if using that word somehow mandates the inclusion of any movie with “Ghostbusters” in the title regardless of the story connection.

One comparison was made to the “Halloween” boxed set, which included every sequel and reboot regardless of story connection to previous films. It’s a fair point, but hardly one that stands up to scrutiny. The “Halloween” movies are pretty much a narrative mess with such confusing continuity that they might as well include everything. Plus, fans got a pretty steady flow of “Halloween” movies for 30 years. “Ghostbusters” fans waiting for that third film were pretty crushed by the idea of a reboot.

The better analogy was from another user who suggested that a “Star Wars” boxed set of movies was somehow incomplete without the derided Star Wars Holiday Special also included. Which, of course, it isn’t.

Feig himself got in on the act by complaining about the omission on Twitter, an act that only served to heightened how much ATC was disconnected from the Reitman trilogy.

Fans of the 2016 film are overlooking the fact that that Feig’s reboot isn’t the only “Ghostbusters” project being left out of the Ultimate Collection. There’s the 1970s Filmation live-action show “The Ghost Busters,” which has nothing to do with the 1984 movie other than Columbia Pictures having to license the title. There’s the 1980s cartoon based on the 1970s show in response to the 1984 movie. Then there’s the “Real Ghostbusters” cartoon which is based on the movie and was made (and titled) in response to Filmation’s cartoon cash-in. Don’t forget the “Extreme Ghostbusters” cartoon from the 1990s, a follow-up to “Real Ghostbusters.” And there’s the video game that Aykroyd likened to a third movie — surely it has cut scenes that could be spliced into a narrative presentation. By the logic of those angry at the 2016 snub, shouldn’t an “ultimate” set also include all of this material as well? (Never mind that Sony doesn’t control the rights to some of it.)

Heck, for good measure why not throw in Bob Hope’s The Ghost Breakers, spiritual predecessor to Ghostbusters released in 1940 by Paramount (and on Blu-ray last year by Kino Lorber)? Ghostbreakers was one of the alternate titles considered for Ghostbusters if they couldn’t work out a deal with Filmation.

So it’s the “ultimate collection” of Reitman “Ghostbusters” movies. It’s not called The Ghostbusters Complete Collection. The studio could have called it the “Trilogy Collection” and the whiners wouldn’t have a leg to stand on (not that they still wouldn’t complain). But it’s called “Ultimate.” So what? The intent of what it’s meant to be is clear regardless of what word is used. It’s just a word. Get over it.

Those who insist that the 2016 film be included aren’t realizing that most people looking to buy this boxed set are fans of the original films who probably didn’t like ATC, and wouldn’t want it included with a collection of the Reitman films. If it were included, it would mostly be ignored anyway, and Sony would have released a bulkier, and thus pricier, boxed set for no good reason, costing them potential sales. Read the room.

And those who are fans of all the films probably already have ATC, or can buy it on its own, and stick it on their shelves next to the trilogy set the way it should be considered — separately.