Shout! Studios has announced the Sept. 6 release of Spitfire Over Berlin, a wartime action epic from director Callum Burn (Lancaster Skies, The Drift). 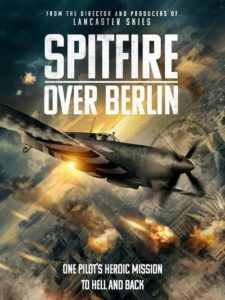 The film will be available for digital purchase, on VOD, and on Blu-ray Disc and DVD.

Featuring aerial footage and an engaging tale of bravery, heroism, and suspense, Spitfire Over Berlin takes viewers back to August 1944 when the American Eighth Air Force is poised to strike Nazi Germany. British intelligence learns that they could be flying into a deadly trap, and with only hours to spare, Flight Lt. Edward Barnes must fly a life and death mission over Berlin in his unarmed Spitfire to obtain photographic evidence and save the lives of 1200 Airmen.

The Blu-ray and DVD editions includes special features, such as the theatrical trailer, and audio commentary with director Callum Burn, producer Andrew Burn, and director of photography Sam Parsons.