The animated Sherlock Gnomes will be released on digital June 5 and on Blu-ray Combo Pack and DVD June 12 from Paramount Home Media Distribution and Metro Goldwyn Mayer Pictures (MGM).

The film made $41.9 million at that box office.

The Blu-ray Combo pack (with DVD) has nearly 45 minutes of bonus content, including the behind-the-scenes featurette “Gnome is Where the Heart Is”; “All Roads Lead to Gnome: London Locations in Sherlock Gnomes”; “Miss Gnomer: Mary J. Blige and the Music of Sherlock Gnomes”; the music video “Stronger Than I Ever Was,” performed by Blige; an instruction segment on how to draw Sherlock Gnomes, Watson, Moriarty and Goons; and “Animating Sherlock Gnomes,” about the movie’s animation. 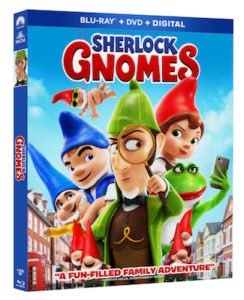