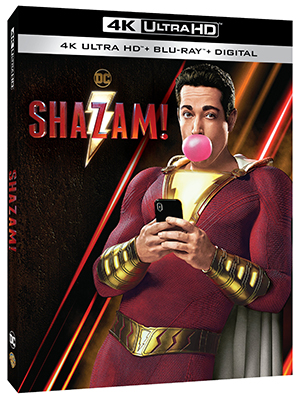 The movie based on the character now known as Shazam has been one of the pleasant surprises of late in an entertainment landscape crowded with superhero adaptations.

For his 80th anniversary, the filmmakers have magnificently captured the essence of one of the most influential characters in early comic book superhero history while successfully re-contextualizing him for a world that is now littered with many of the very comic book tropes he helped inspire (and which the film has a lot of fun calling out and subverting).

The story involves a foster kid named Billy Batson (Asher Angel), who is summoned into a magical realm by a wizard seeking to empower a new champion to keep the evil forces of the seven deadly sins at bay. When Billy speaks the word “Shazam,” he is transformed into the hero of the same name, though with an adult body.

The name Shazam is derived from the mythological heroes from which he draws his powers: the wisdom of Solomon, strength of Hercules, stamina of Atlas, power of Zeus, courage of Achilles and speed of Mercury.

The older Shazam version of Billy is played by Zachary Levi, whose goofy charm perfectly embodies the notion of a child trying to be a superhero. The film is essentially the superhero movie version of Big, and you can be sure that the film doesn’t miss its chances to reference that fact.

With Billy still possessing a teenager’s mind while learning to deal with his new powers, he seeks the advice of foster brother Freddy Freeman (not to be confused with the Atlanta Braves first baseman). Freddy (Jack Dylan Grazer) is a huge fan of superheroes and begins building Shazam’s fan base with YouTube videos showing off his powers, which include flight, superspeed and the ability to shoot lightning bolts from his hands.

The idea of wish fulfillment is a strong recurring theme in the film, as what kid doesn’t daydream about having fantastic abilities that let them put their worries behind them?

The flipside of Billy’s story is Dr. Sivana (Mark Strong), who as a child was rejected by the wizard and has spent 45 years seeking artifacts to return him to the wizard’s cave. In doing so, he becomes the champion for the deadly sins, giving him the power to seek retribution against those who tormented him over the years.

Sivana wants the powers of Shazam for himself so that the spirits of the sins will be free to rain havoc upon the world once more. This of course leads to another classic battle between good and evil that no good comic book movie should be without.

The parallel journeys of Billy and Sivana force the film into a tricky balancing act that director David F. Sandberg somehow pulls off. In contrast to the lighthearted superhero romp of Billy and Freddy, Sivana’s story is more like something out of a horror film, with scary monsters lurking in the shadows causing pain and destruction.

Another positive side effect of the film is the spotlight it puts on foster families, and it’s interesting this film came so soon after 2018’s very good Instant Family, which also dealt with the subject. The foster storyline gives Shazam! a lot of its heart, and the kids in Billy’s foster family end up serving the plot in a huge way that ends up producing one of the biggest fist-pumping moments for fans of the Shazam comics.

Speaking of which, the character’s tumultuous publication history is a big factor in what may be one of the oddest cinematic coincidences of recent years.

The character was introduced by Fawcett Comics in 1939 as Captain Marvel and became the top-selling comic book of the 1940s, even more popular than Superman. He even inspired DC Comics to give Superman the power of flight, when before the Man of Steel was simply able to jump long distances. Captain Marvel was also one of the first heroes to inspire a family of sidekicks with similar powers, including a female version of the main hero.

Nonetheless, DC sued Fawcett claiming that Captain Marvel was basically a ripoff of Superman, and by the early 1950s Fawcett discontinued the character.

In the meantime, Marvel Comics created its own Captain Marvel in the 1960s and seized the trademark on the name, so that when DC acquired publishing rights to the original Captain Marvel and revived the character in the 1970s it couldn’t use the character’s original name in comic book titles, which is how he became known as just Shazam.

As it turned out, a movie based on the Marvel Comics version would end up coming out just a month before Shazam!, the dueling “Captain Marvel” properties adding to Hollywood lore of similarly themed movies hitting theaters at the same time, like the rival James Bond movies of 1983, multiple Columbus movies of 1992, and the Armageddon vs. Deep Impact asteroid movies of 1998.

And, as if Shazam not being allowed to use his original name weren’t enough, Marvel’s movie wasn’t even based on the original version of its own Captain Marvel, but a rebooted version with a previously obscure female superhero taking up the mantle.

In another coincidence, both Captain Marvel movies would feature Djimon Hounsou, who plays the wizard in Shazam! and reprises his Guardians of the Galaxy role as a Kree soldier in Captain Marvel.

In fact, Shazam! is something of an amalgamation of the current superhero movie trend. Like Spider-Man: Homecoming, it plays a Ramones song over an animated end credits sequence (though Shazam!’s serves the motifs of the movie better).

Adam Brody and D.J. Cotrona, who in 2007 had been cast in a now-canceled “Justice League” movie, finally get their chance to play superheroes in Shazam!. Mark Strong returns to the DC Comics fold having previously played Sinestro in the awful Green Lantern movie. And with his role as Sivana’s father, John Glover has now played the father of two DC supervillains,, having played Lex Luthor’s father on “Smallville” (he’s also voiced “The Riddler” in Batman cartoons and played a villain in Batman & Robin).

The Shazam! Blu-ray contains a sequel of sorts in the form of a four-minute motion comic called “Superhero Hooky” in which Billy must explain why he and his foster siblings ditched school for a superhero adventure.

The Blu-ray also includes a whopping 16 deleted scenes that run about 37 minutes in total. About half of them are alternate or lesser-developed versions of sequences in the final film, taken from an earlier cut before the story was tweaked to add a bit bigger scale. There are also some fun additional moments featuring the Shazam family, and a tease of a future supervillain to be played by Dwayne Johnson.

Among the behind-the-scenes material, the most comprehensive is the 27-minute “The Magical World of Shazam,” which delves into all aspects of the production. The making of the climactic battle is the focus of a separate 10-minute scene study. The three-minute “Super Fun Zac” puts a spotlight on Levi in the title role, while the six-minute “Shazamily Values” looks into the foster family aspect of the movie.

Finally, the history and identity of the character is touched upon on the six-minute “Who Is Shazam?”