The July 4 premiere of the third season of “Stranger Things” kept the Netflix series at No. 1 on not only Parrot Analytics’ digital originals rankings the week ended July 6, but also the data firm’s overall list of TV series from any platform, including broadcast and cable.

“Stranger Things” grabbed 158.4 million average daily Demand Expressions, the proprietary metric used by Parrot Analytics to measure global demand for TV content. That was up 68.5% in expressions compared with the previous week, when it was also No. 1 on both charts.

Hulu’s “The Handmaid’s Tale” jumped up a spot to No. 2, though its demand expressions dropped 1% to 37.5 million.

Netflix’s “Black Mirror” slipped to the No. 3 spot on the digital originals chart with 35.5 million expressions, down 6.7% from a week earlier.

Rounding out the top five on the digital originals chart was Netflix’s “Lucifer,” maintaining the No. 5 spot from the previous two weeks. The series, based on a character from the DC Comics comic-book series “The Sandman,” dropped 7.2% in expressions to 31.7 million.

The biggest rise in the digital original chart for the week is DC Universe’s animated series “Young Justice,” which premiered the second half of its third season July 2 with three new episodes. The show jumped to N0. 8 on the chart, up from No. 19 the previous week. Expressions grew 52% to 24.2 million. A new episode will be available weekly until the season finale at the end of August. 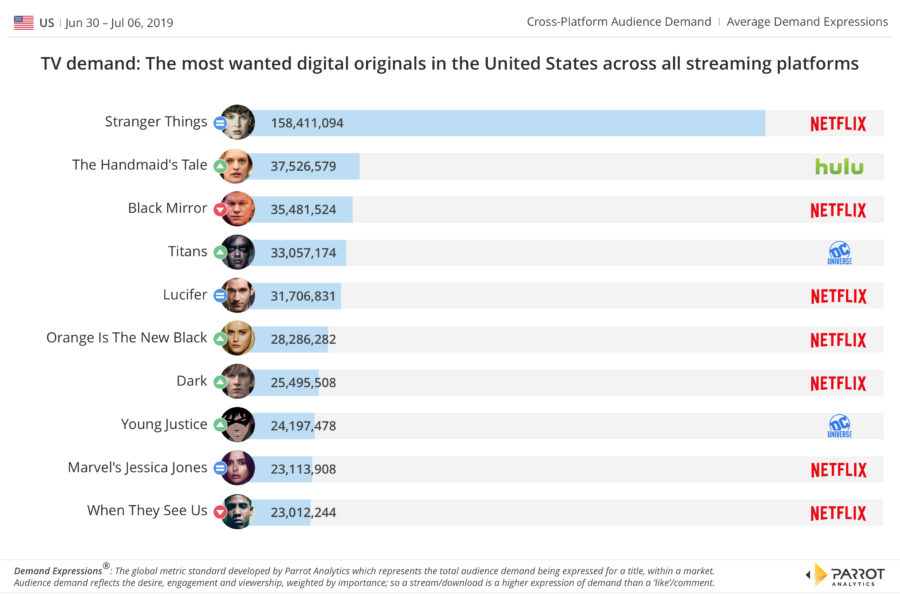