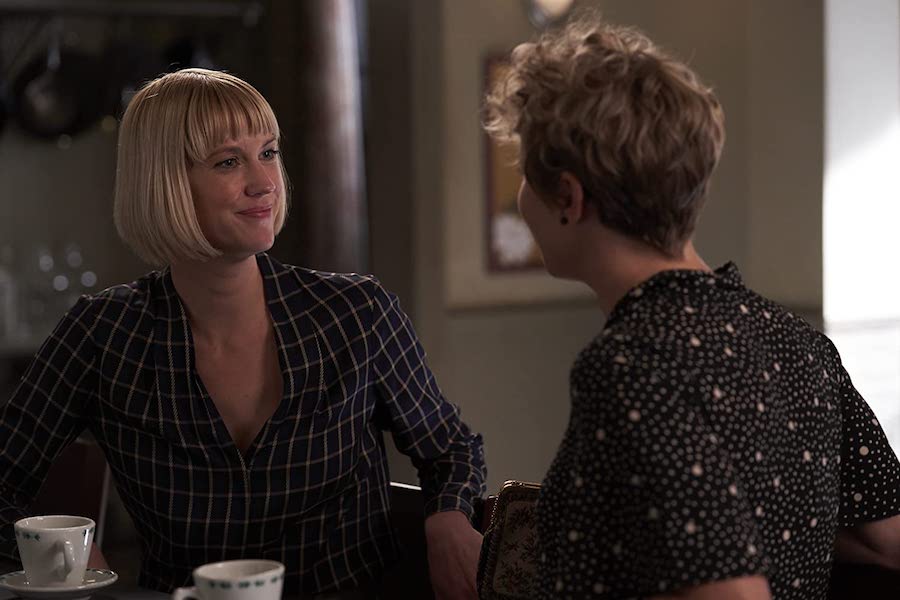 Season three of “Frankie Drake Mysteries,” Frontline: Opiods, Inc. and And She Could Be Next are among the titles coming to DVD and digital from PBS Distribution in September.

Available now is Easy Yoga for Everything With Peggy Cappy. For more than 40 years, Cappy has been teaching yoga to students of all ages and abilities. These 10 workouts address how yoga can be used to alleviate pain and cope with various physical challenges from arthritis to heart health, back pain and diabetes. In these exercise routines, Peggy Cappy demonstrates her signature yoga approach in a workout that anyone can do in a standing or a seated position; with or without the aid of a chair; at home; one routine or one segment at a time. Programs include Easy Yoga for Arthritis, Heart Healthy Yoga, Easy Yoga for Easing Pain, Back Care Basics, Easy Yoga for Diabetes, Survival Guide for Pain-Free Living, Part 1: The Basics , Part 2: Lower Body, Part 3: Upper Body, Part 4: Preventing Pain, and Easy Yoga: The Secret to Strength and Balance.

Also available is Prehistoric Road Trip, in which viewers join host Emily Graslie for a journey around the Dakotas, Montana, Wyoming and Nebraska to explore 2.5 billion years of Earth’s history. Each of the three episodes examines different eras in time, focusing on the geology and ecology of prehistoric environments to discover what the landscape may have resembled millions, even billions, of years ago. Graslie, chief curiosity correspondent at the Field Museum in Chicago and YouTube sensation, uncovers the geologic history of North America, helping scientists dig up dinosaurs and other extraordinary creatures.

Due Sept. 8 is the documentary And She Could Be Next. It tells the story of a defiant movement of women of color transforming American politics from the ground up. Filmed during the historic 2018 midterm elections, the series follows organizers and candidates as they fight on behalf of black, brown, immigrant and poor communities — long neglected by politicians and pundits alike. As they harness the power of this New American Majority, the film asks whether democracy can be preserved — and made stronger — by those most marginalized. Made by a team of women filmmakers of color, And She Could Be Next features history-makers Stacey Abrams, Rashida Tlaib, Lucy McBath, Maria Elena Durazo, Veronica Escobar, Bushra Amiwala and Nse Ufot.

Also coming Sept. 8 is season three of “Frankie Drake Mysteries,” which delivers a slate of new adventures as the ladies of Drake Private Detectives take on more challenging cases and face off against some impressive foes. Frankie and Trudy continue to rely on Mary and Flo, who are always ready to lend a hand snooping through police files or sneaking a peek at an autopsy report. Mary’s newfound confidence at the police station, and in life, leaves her frustrated with her status as a morality officer and pushes her towards exciting new professional goals. Meanwhile, Flo finishes her in-class portion of medical school and looks forward to her clinical training in-hospital, all while juggling a long-distance beau and the varied demands of Drake Detective cases. As Trudy’s love life with Bill Peters heats up, she also excels at her investigative work, taking on some truly hair-raising risks as she works to solve cases. And finally, Frankie continues to lead the team with aplomb and ingenuity, while exploring a romantic connection with boxer Moses Page. The adventures take viewers from London with new mystery novelist friend Agatha Christie, to a mermaid-themed jazz club, and from swanky Toronto private schools to busy telephone exchanges filled with busybody operators.

Also due Sept. 8 is Let’s Talk Menopause, in which host Dr. Tara Allmen provides viewers with the tools every woman needs to enter this phase of their lives triumphantly. An estimated 6,000 women reach menopause every day in the United States, and by 2025, more than 1 billion women in the world will be experiencing menopause. In this one-hour documentary special, Dr. Allmen, alongside other women’s health experts, explains common symptoms, health risks and therapeutic options. Also, women share their first-hand experiences, personal journeys and successful strategies to effectively cope with perimenopause and menopause.

Coming Sept. 22 is Lucy Worsley’s 12 Days of Tudor Christmas. Worsley recreates how Christmas was celebrated during the age of Henry VIII — eating, drinking, singing, dancing and partying like people did 500 years ago. Filmed at some of England’s most historic and beautiful locations, she discovers the roots of some of the Christmas customs we still enjoy today and explores why other festive traditions were lost. With the help of food historian Annie Gray, she prepares two royal feasts in the kitchens of Hampton Court Palace. Dressed as Henry himself, Lucy samples a stuffed boar’s head; later, she tastes a giant forerunner of the Christmas cake. Lucy joins Tudor carol-singers to hear a festive hit written by Henry; experiences the rabble-rousing fun and chaos created by the Lord of Misrule; and enjoys the kind of spectacular entertainment staged at court. She also discovers how ordinary Tudors liked to enjoy themselves — and why the holidays were such a welcome break. On each of the traditional 12 days of Christmas, Lucy reveals a different aspect of the festivities — uncovering fresh insights into the Tudor mind and casting a new light on Christmas itself.

Due Sept. 29 is Frontline: Opiods, Inc. “Frontline” and the Financial Times investigate how the drug company Insys Therapeutics profited from a fentanyl-based painkiller up to 100 times stronger than morphine — and how some Wall Street investors looked the other way even as questions about the company’s practices mounted. A year in the making, Opioids, Inc. tells the inside story of how Insys profited from Subsys, a fast-acting fentanyl-based spray that’s been linked to hundreds of deaths. Tactics included targeting high-prescribing doctors and nurse practitioners known within the company as “whales,” misleading insurers, and holding contests for the sales team: the higher the prescription doses they got doctors to write, the larger the cash prize — despite the dangers to patients. But as the documentary traces in unprecedented detail, the scheme fell apart. With federal prosecutors using anti-racketeering laws designed to fight organized crime, Insys became the first pharmaceutical company to have its top executives sentenced to prison time in connection with the opioid crisis. Through the lens of one company’s spectacular rise and fall, “Opioids, Inc.” is a powerful look at the role pharmaceutical companies have played in fueling America’s epidemic of opioid addiction, how they and their stockholders have profited, and how they’re being held accountable.