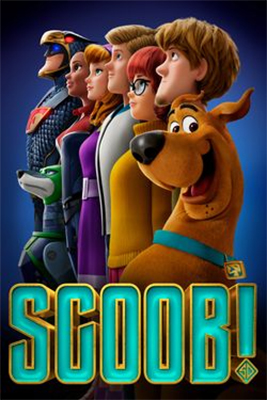 In upscaling “Scooby-Doo!” for what would have been the long-running franchise’s first big-screen outing, the filmmakers behind Scoob! have sent the Mystery Inc. gang far beyond the trappings of their typical adventures.

Instead of a mere ghost story to unravel, the team finds itself entangled in an Indiana Jones-style globetrotting adventure that involves unlocking the gates of hell to uncover vast treasures left behind by Alexander the Great. Along the way they encounter enough characters from other classic cartoons to make this seem less like a “Scooby-Doo!” movie and more like phase one of a Hanna-Barbera cinematic universe.

It begins simply enough, with a flashback of young Shaggy meeting his talking-dog pal Scooby for the first time — and the pair in turn joining forces with the junior versions of Fred, Daphne and Velma to conquer a haunted house on Halloween. Cut to the present, and the fully fledged mystery-solving team we all know and love is looking for their next case. The client turns out to be none other than Simon Cowell, voicing himself in the grand tradition of the Scooby celebrity crossover, though things hit a snag when he questions the value of Shaggy and Scoob to the team, causing the pair to sulk off.

Once on their own, the pair are attacked by an army of robots and rescued by famed HB superheroes Blue Falcon and Dynomutt, who reveal the villain is none other than Dick Dastardly of HB’s “Wacky Races” fame.

Since Scooby is descended from the trusted dog of Alexander, Dasterdly needs his DNA to unlock the gates, and kidnaps the rest of Mystery Inc. to set a trap. But to unveil the gates, he must retrieve the three skulls of the guardian Cerberus from their hiding spots around the world.

The bizarre story beats, while putting a spin on timeless Scooby tropes, offer an excuse for some wild, colorful animation, as the classic characters are modernized through CGI, while Dasterdly and his army of diminutive robots are no doubt meant to evoke the flavor of Gru and the Minions from Despicable Me. It’s a splashy distraction for the little ones that delivers a warm message about friendship as it brings a touch of nostalgia for older viewers.

Additional extras include a 10-minute “How to Draw Scooby-Doo” instructional video with Cervone, a four-minute voice-cast blooper reel and a one-minute promotional video in which the cast plays with puppies.

Apple TV offers a six-minute “New Friends, Newer Villains” featurette about all the Hanna-Barbera characters in the film. Vudu has an additional one-minute “Welcome Aboard the Falcon Fury” video, which is just a clip from the film.