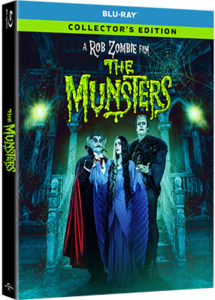 Produced by Universal 1440 Entertainment, the direct-to-video arm of Universal Filmed Entertainment Group, the film is based on the 1960s TV series of the same name, and provides an origin story of the monster family.

The comedy focuses on the courtship between Lily (Sheri Moon Zombie), a 150-year-old lovelorn vampire, and Herman (Jeff Daniel Phillips), a seven-foot-tall green experiment with a heart of gold. However, her father The Count (Daniel Roebuck) has other plans for her future, and they don’t involve her bumbling new beau.

Blu-ray and DVD extras include a commentary with Zombie, and the hour-long behind-the-scenes featurette “The Munsters: Return To Mockingbird Lane.”