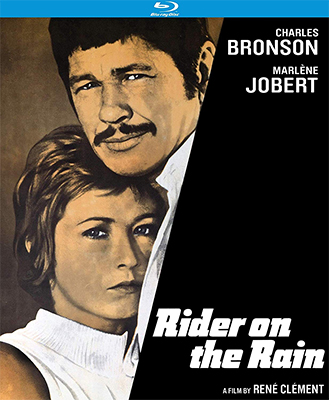 Despite a scene in which Charles Bronson dispatches a trio of polished punks in an upscale brothel, the onetime sleeper arthouse hit Rider on the Rain often emphasizes the actor’s sweeter side. What, you say? Well, OK, this isn’t to deny that Chuck doles some out pretty rough psychological treatment (albeit for a cause) to co-star Marlene Jobert, who plays a woman who has just been brutally raped. But his anti-Death Wish persona here isn’t truly consistent with a Photoshop mash-up I saw last year of a so-called Bronson Christmas album, whose dreamed-up selections included at least three personal favorites of mine: Knock Off Those Jingle Bells, If I Catch You Kissing Santa Claus and Make With the Gifts … Pronto!

There’s a relative minimum of that kind of attitude here. In fact, you can make a pretty fair case — and bonus track commentators Howard S. Berger, Steve Mitchell and Nathaniel Thompson do — that Rider is the movie that put Bronson over for international audiences that included a lot of women, which had a trickle-down effect on his lead-actor fortunes in America. Before then, Bronson had been a distinctive face (billed by his real name, Charles Buchinsky) all the way back to George Cukor’s Pat and Mike and a little before, including a memorable turn as the well-named “Igor” in House of Wax. After that, Vera Cruz, The Magnificent Seven, The Great Escape and Once Upon a Time in the West cemented his status as an action “reliable.” But this picture was something different because Bronson got to wear a suit, though apparently Bronson had initial misgivings about fancier threads the way that Steve McQueen did when he

In this case, Bronson plays … well, maybe I shouldn’t say because Rider isn’t all that well known these days, though it once got a lot of 3 a.m. showings on TV. Come to think, the entire picture is a spoiler maze of twists and turns as we try to figure out what the hell is going on, though thankfully, the script seems aware that it’s been a bit scatterbrained throughout and does a satisfying job of mopping up during the final scenes. In its defense, the movie does begin with a quotation comparing Jobert as the heroine to Alice in Alice in Wonderland, which can be seen as a ticket for the filmmakers to go full crazy-quilt.

So out of the French rain — this is one overcast picture throughout — comes a bus passenger who’d look pretty scary even without the face mask he eventually dons. And he’s especially so, since he’s stalking Jobert — a puzzling-to-me total innocent who’s married to a loutish airline navigator (and this is near-incidental to the plot) with few redeeming values. With her husband is away on a another of his frequent flights, the stalker breaks into the house, puts on his mask and rapes Jobert — an ugly scene by any standards but one whose specifics are largely suggested (the film now carries a ‘PG-13’ when it originally had a long ago — and long-discarded — ‘M’). The result sets off some mayhem involving corpses — a mystery that for reasons of his own, stranger Bronson shows up to sleuth.

I’ve been a 50-year Jobert fan, and I suppose it doesn’t hurt that I also think she’s one of the best-looking actresses who was ever in the movies (I have a history of redheads being my downfall). Here, though, I think that despite strong chemistry with Bronson, her attempts to play a mostly guileless hottie who eventually wises up (some) makes her come off as borderline simple — especially given that the character was eyewitness to some rather sordid behavior when she was growing up. This is to say that her still attractive mother (Annie Cordy, rounding out great mom-daughter casting) has, as used to be said, “been around.” She is now, of all things, running a bowling alley, though she’s a lot more chic in appearance than the women who give me my own size-11’s before I prepare to roll a 101. By the way, Wikipedia notes that Cordy’s recording of “La Ballade de Davy Crockett” (which is what you think it is) was No. 1 on the French charts for five weeks. I need a drink.

Rider’s standout virtue is its character dynamics, and the voiceover trio is correct on the bonus track in noting that were this an American TV movie (which would be its more likely Hollywood genesis), the running time would be 74 minutes instead of the two hours we get and would have the guts completely cut out of it. Instead, the great producer Serge Silberman (a slew of super late Bunuel films and Kurosawa’s Ran) found himself with France’s third-biggest grosser of its year and a big-city crossover hit with sophisticated audiences over here, who probably weren’t going to Airport; I saw it first-run in New York amid a lot of buzz. This would have been the dubbed version, which is a yahoo-magnet I generally hate, though the job done here isn’t bad. I’ve written this piece from seeing the Blu-ray’s also included and barely longer French cut, which is still very close to what I saw in 1970, with techno-changes that are on the inside-baseball (or inside-something) side.

Veteran director Rene Clement gave the movie has a soft look, which many French thrillers/mysteries had back then, and the visual rendering is pretty close to what I remember, which was never going to sport a vital color palate in the first place. After taking all the time to learn his French phonetically, it must have irked Bronson when U.S. distributor Avco-Embassy then dubbed the movies for American audiences (and he’d already been a kid, as the son of an immigrant Lithuanian coal miner, who didn’t learn English until he was in his teens). It all worked out, and Bronson became something of a drive-in/grindhouse superstar in the ’70s, but you have to wonder if his initial reaction was to flash on a fourth title that appears on the LP jacket of that fanciful Christmas LP: Meet Saint Smith & Saint Wesson.