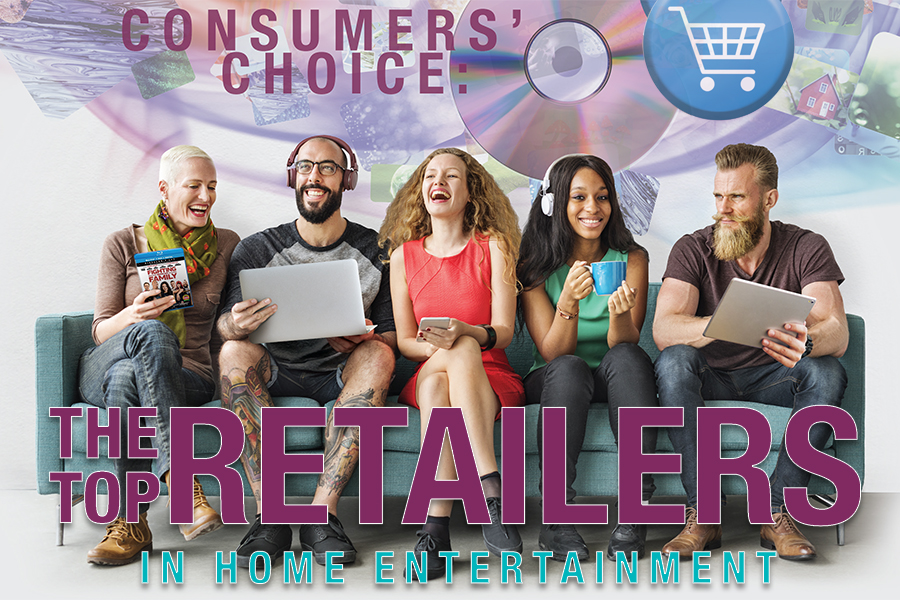 In our June 2019 issue, we profile the top 12 retailers in home entertainment, which can be found here.

In addition to the top dozen retailers in home entertainment for 2019, Media Play News below profiles eight other key retailers, as identified by studio and retail sources, that are bubbling under those top 12.

The over-the-top service CBS All Access has 4 million subscribers, according to eMarketer. Owned and operated by CBS Interactive, it offers original content, content newly aired on CBS’s broadcast properties, and content from CBS’s library. The service costs $5.99 per month with limited commercials and $9.99 per month commercial free.

Original content on the service includes “Star Trek” spinoffs “Star Trek: Discovery” and the upcoming “Star Trek: Picard”; a new “Twilight Zone” series, produced by Us and Get Out director Jordan Peele; and “The Good Wife” spinoff “The Good Fight,” starring Christine Baransky.

Spectrum On Demand, owned by cable and telecommunications company Charter Communications, provides transactional and other access to thousands of movies and TV shows, including programming from NBC, ABC, CBS and more. Viewers can also subscribe to premium channels (such as HBO), Video On Demand and Pay-Per-View, which includes movies, special events, live concerts, stand-up comedy specials and more. In January, Charter Communications launched the Spectrum TV App on Apple TV.

Despite the extinction of most brick-and-mortar video rental stores, Glenview, Ill.-based Family Video — which celebrated 40 years of business last October — continues to survive, reportedly generating $450 million in revenue in 2017 operating about 700 stores in rural areas throughout the Midwest, Southwest and Northeast. Parent Highland Ventures owns the property from which most Family Video stores and more than 500 third-party tenants operate, giving the chain a real estate lifeline that has allowed it to maintain a video rental business long after Blockbuster, Movie Gallery and Hollywood Video closed their doors. Franchise brands include Marco’s Pizza, Stay Fit 24 (which Family Video launched in 2008), Total Wireless (2018), and kiosk-based Highland Pure Water & Ice (2017).

FandangoNow is one of the retail partners in Movies Anywhere, the digital movie collection service. It serves millions of visitors a month, with more than 80,000 new-release and catalog movies, next-day TV shows, and a growing library of 4K titles available to watch on more than 200 million connected, over-the-top and mobile devices.

FandangoNow not only ties in digital purchases and rentals with its movie-ticket-selling parent, offering free digital movies to fans who buy Fandango VIP tickets to early access screenings, but also offers “Binge Bundles” of multiple movies for one low price and monthly “Fresh Picks” based on Rotten Tomatoes ratings, among other promotions.

Like other SVOD services, Sling TV allows users to choose between various tiers, with prices that start at $15 per month for a small amount of channels and go up as more channels are added.

YouTube Premium is a subscription streaming service launched by YouTube as a paid, premium alternative to its free service. The $11.99 per month service has 1.5 million subscribers, according to eMarketer. YouTube Premium provides advertising-free streaming of all videos hosted by YouTube, offline play and background playback of videos on mobile devices, YouTube Music, and access to original series and films — including “Cobra Kai,” the series based on the 1984 movie The Karate Kid.