Beatty stars in (as well as produces, co-writes, and co-directs) the comedy Heaven Can Wait, which has been fully restored and remastered from the original negative under Beatty’s supervision. 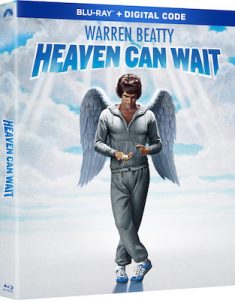 Directed by Beatty and Buck Henry, with a screenplay by Elaine May and Beatty, the film also stars Julie Christie, James Mason, Charles Grodin, Dyan Cannon, Buck Henry, Vincent Gardenia and Jack Warden.  The film was nominated for nine Academy Awards, including Best Picture, Best Director (Beatty and Henry), Best Writing, Screenplay Based on Material from Another Medium (Beatty and May), Best Actor in a Leading Role (Beatty), Best Actor in a Supporting Role (Warden), Best Actress in a Supporting Role (Cannon), and more.

The film follows Joe Pendleton (Beatty), a Los Angeles Rams backup quarterback ready to lead the team all the way to the Super Bowl until an overzealous guardian angel prematurely plucks him from the living. When he’s returned to Earth in the body of millionaire industrialist Leo Farnsworth, he inherits a world of challenges, including winning the love of a woman (Christie) who hates Farnsworth.

The Blu-ray includes the feature film in high-definition and access to a digital copy of the film.

Directed, co-written, produced by and starring Beatty, Reds celebrates its 40th anniversary this year. The story of a radical American journalist embroiled in the Bolshevik revolution  was originally released on Dec. 25, 1981. Paramount will release the film in a two-disc Blu-ray set, newly restored under Beatty’s supervision. The film was restored and remastered from the original negative in 4K with high dynamic range using a vintage print from the Paramount archives as a reference, which was approved by Academy Award-winning cinematographer Vittorio Storaro. 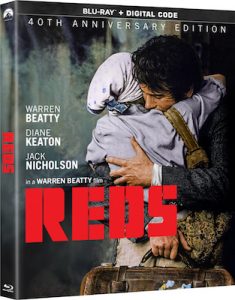 Punctuated by interviews with real-life activists and witnesses to the revolution, Reds depicts the love story between activists John Reed (Beatty) and Louise Bryant (Diane Keaton) set against the outbreak of World War I and the rise of communism in Russia.  In addition to Keaton and Beatty, the film’s cast includes Jack Nicholson, Edward Herrmann, Gene Hackman, Paul Sorvino and Maureen Stapleton, whose performance won her an Academy Award for Best Actress in a Supporting Role.

The film garnered 12 Academy Award nominations and won three, including Best Director for Beatty. The Oscar-nominated screenplay was written by Beatty and Trevor Griffiths.

The new Blu-ray set includes more than an hour of legacy bonus content, as well as access to a digital copy of the film.