Beginning in mid-March, SVOD use in the United States skyrocketed to nearly 600 minutes monthly from fewer than 300 minutes in June 2019. The tally surpassed 700 minutes in April, before leveling off in the mid-600 range in May and June, according to new data from 7Park.

Throughout the pandemic, one service continues to dominate: Netflix. While the SVOD pioneer’s recent quarterly financials underscored the platform’s enduring appeal among new subscribers, actual use of the service is undeniable. 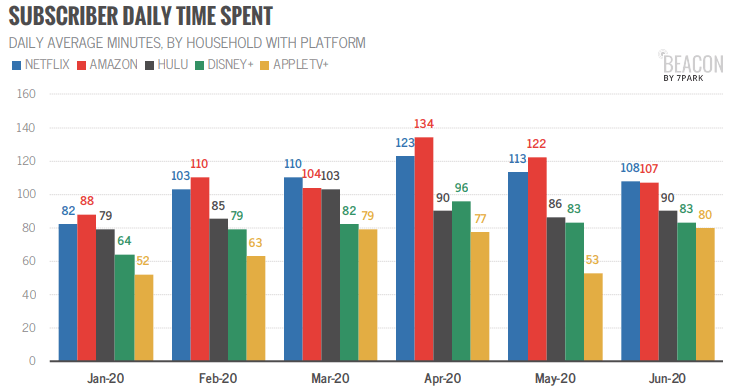 New York-based 7Park said 73% of viewers watched only one platform, while 22% watched two platforms and 5% watched three or more. Multiple platform usage increased since March due to COVID-19 stay-at-home orders but looks to be trending down. 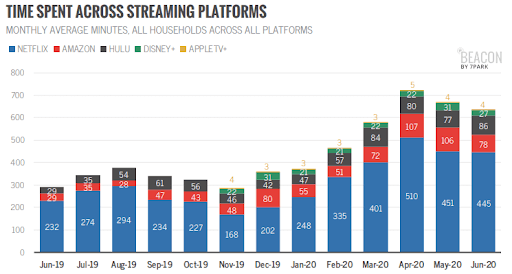 “Streaming is still above March pre-COVID-19 stay-at-home order levels, and the majority of viewers’ time spent continues to be on Netflix, which accounted for 70% (445 minutes) of total streaming minutes across all platforms,” wrote Lindsay Bisson, with 7Park.

That said, use of Netflix and Prime Video declined 4% and 12%, respectively, during the pandemic while upstart services such as Apple TV+ and Disney+ saw surges due to original content such as Defending Jacob and Hamilton, respectively.

Between July 1-5, 7Park said Hamilton was the most-viewed streaming video title, accounting for 22% of the time households spent across all five major streaming platforms. More than 80% of Disney+ users watched the Lin-Manuel Miranda-written/starrer, and it secured 87% of the total time spent on Disney+ platform.