Subscription streaming VOD isn’t just for the younger demo. New data from Ampere Analysis found streaming services are actively targeting viewers aged 35 and over in their content commissioning strategies. These audiences have traditionally been linear TV’s core viewers, but now SVOD pioneers such as Netflix, Amazon Prime Video and Hulu have turned their attention — and programming budgets — to older viewers, according to Ampere. 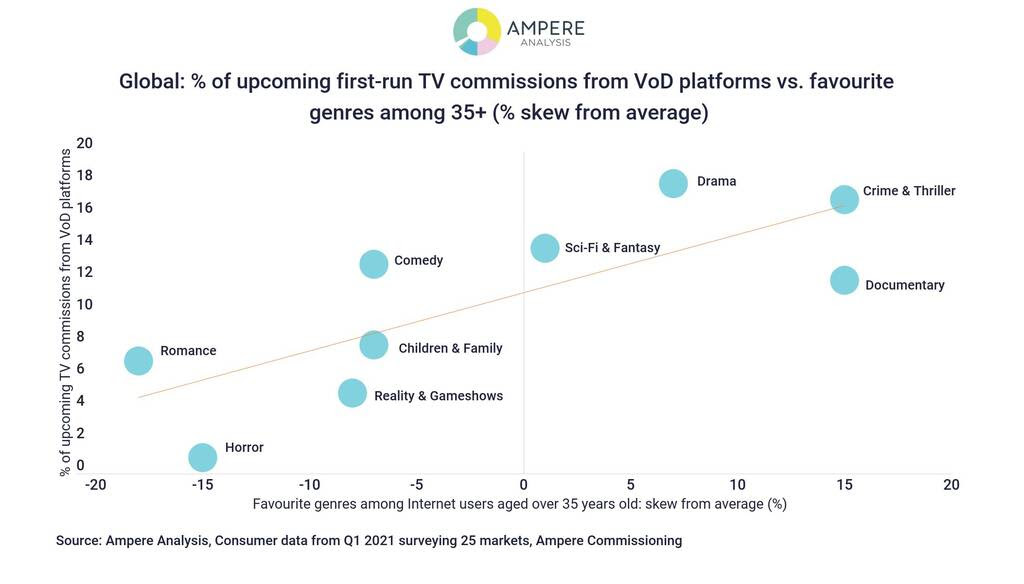 London-based Ampere noted older viewers covet documentaries, dramas and crime thrillers, which are now among streamers’ top five commissioned genres. Netflix is the largest original content commissioner worldwide, with more than 100 titles ordered between January and March. This amounts to more than 30% of the number of titles ordered by Netflix in 2020. In March, Netflix ordered more doc titles than any other genre, with over half true crime.

“The fastest growth in uptake of VOD viewing is now in the 35–44-year-old age bracket,” Minal Modha, consumer research lead at Ampere Analysis, said in a statement. “Nearly twice as many in this age group are now high VOD viewers compared to two years ago.”

At the same time, Ampere noted consumers who don’t engage with VOD are 55% more likely to be older than 45. The report classified TV viewers based on the time they spend watching TV or online video on a typical day. “Medium” viewers watch for two to four hours a day, and “high” viewers more than four hours a day. About 50% of “medium” linear TV viewers are over 45 years old, with this group often watching locally produced TV series. “High” linear viewers are in the same age range with 57% aged over 45. They are driven by a love of sports and TV shows, with one third (35%) focusing on live sports.

“The laser-like focus on matching commissioning strategies with the favorite genres of the older demographics in question is evident, but to more fully compete with linear TV players, local language content is going to be key, as will some sports content, be it live or ancillary,” Modha said in a statement.