The research firm says Netflix, Disney and YouTube are the biggest benefactors of consumer spending on over-the-top video. In 2021, just under one-third (30.8%) of all U.S. OTT subscription revenue will go to Netflix. Disney will account for about one-fourth (25.9%) of SVOD revenue, and YouTube will account for 13.2%. 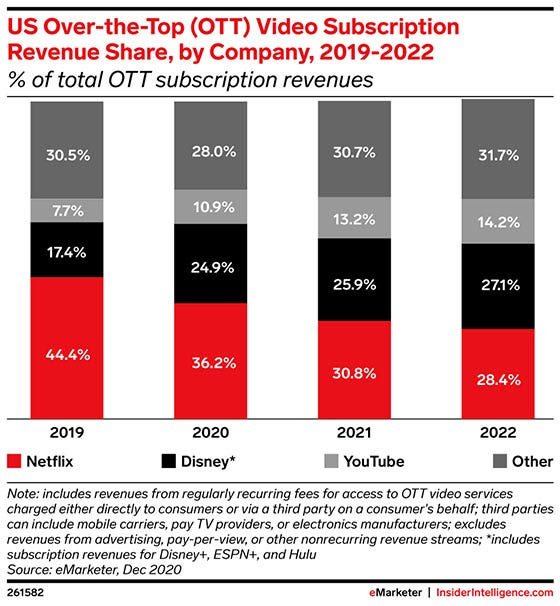 The research firm says Netflix’s share of total OTT subscription revenues is declining, which is as a result of increased competition and market size, not service quality. As reported, Netflix had a record year in 2020, adding millions of North American subs in a saturated market. E-Marketer expects Netflix’s domestic subscription revenue to increase to $11.76 billion in 2021, up from $10.64 billion in 2020.

“Even though [online TV] subscribers remain low compared with the most popular streaming products, the high fees of [virtual MVPDs] have a big impact on these companies’ subscription revenues,” Benes wrote.