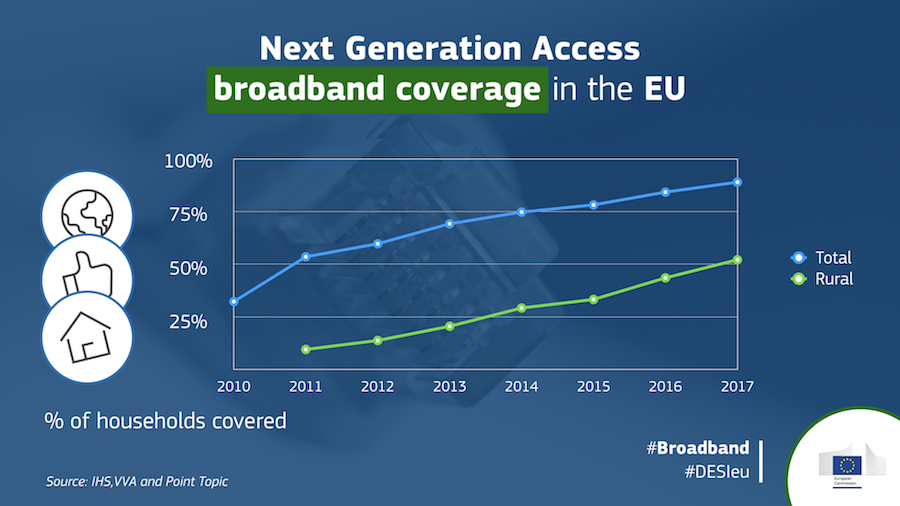 At the end of June 2017, more than three quarters of homes in the 28 countries in the European Union (EU28) had access to high-speed broadband services, according to a new report published today by the European Commission.

For the first time, 4G LTE availability matched 3G HSPA networks, in terms of the number of households covered.

“VSDL was the fastest-growing fixed broadband technology for the sixth consecutive year, supported by the rapid rollout of VDSL networks in Italy and the Czech Republic. Both countries reported double-digit increases over the previous year,” said James Joyner, senior research analyst with HIS Markit, in a statement. “Fiber-to-the-home (FTTP) coverage increased at a faster rate than in the previous iteration of the study, aided by deployments in France and Spain. However, growth in DOCSIS 3.0 networks has slowed, with the most densely populated areas already reached.”

Other key findings in the report include:

Out of the 31 countries studied, 22 reported NGA coverage above 80%, according to the report. As was the case last year, Malta was the only country to record complete coverage for the NGA technology category, while Switzerland, Belgium, the Netherlands, Iceland and Portugal recorded coverage levels above 95%. Greece was the lowest-ranked country in terms of the proportion of households covered by NGA networks. In addition, in Bulgaria, Romania, Croatia, Poland and France, NGA networks covered less than 75%of households, in the first half of 2017.

Contrasting network strategies contribute to large differences in terms of FTTP coverage among member states, according to the report. In terms of FTTP availability, Portugal, Latvia, Lithuania and Spain led the EU28, with FTTP networks reaching more than 70% of households in all four countries. Operators in these countries have focused on FTTP deployments rather than upgrading existing DSL networks to VDSL. As a result, VDSL networks reached less than 20% of households in all four countries at the end of June 2017. In contrast, fewer than 3% of households in Belgium, Greece and the UK had access to FTTP networks at the end of June 2017.