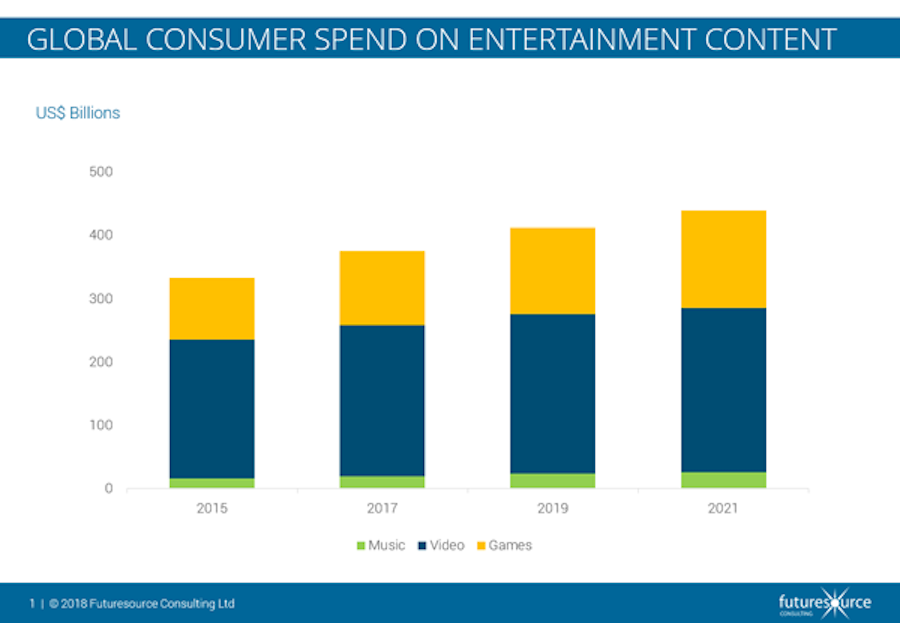 Consumer spending on entertainment content (video, games and music) is set to reach $439 billion globally by 2021, a 17% increase from 2017, according to the latest “Global Entertainment Content Outlook” report from Futuresource Consulting.

“As expected, TV and video account for the lion’s share of this consumer spend,” said author Tristan Veale, market analyst at Futuresource Consulting, in a statement. “However, music has enjoyed a resurgence in recent years and continued innovations within gaming means that both markets are impacting on consumers’ spending habits, with smartphones a key facilitator of this tearing up of the entertainment market rulebook.”

Both gaming and music will achieve a compound annual growth rate of 7% over the next five years, whereas video is on course for a more modest CAGR of 2%.

Futuresource found subscription video on demand (SVOD) services such as Netflix, Amazon Prime Video and Hulu are rapidly dominating the overall home video entertainment sector, which in addition to SVOD includes DVD, Blu-ray, EST and VOD. In 2013, SVOD was just 13% of home video consumer spend, according to the report, but at the end of 2017, SVOD comprised almost half of the $42 billion spent worldwide. Global subscription numbers will rise at a CAGR of 15% between 2017 to 2021, according to the report.

“2017 was the year that annual SVOD spend exceeded worldwide spend on packaged media,” said Veale in a statement. “Not only this, but by 2021 SVOD will account for 70% of total home video spend with households taking multiple services instrumental in the growth of this sector.”

Still, by comparison in 2017 SVOD was a $19 billion market whereas pay-TV was a $200 billion market, according to the report, which noted that there remains a significant appetite for pay-TV services, due to bundling with broadband and telephone services, early availability of premium content, and access to exclusive content, notably sports. Pay-TV expenditure rose 4% from 2016. In value terms, the United States accounted for close to half of all the global spend, at $106 billion in 2017. In subscriber terms, China’s 336 million pay-TV households took the top global position, but the average household spend in China was $3 per month — just one tenth of the U.S. spend. The number of pay-TV subscribers fell in the United States, Canada and France with drops of 1%, 1% and 3%, respectively. Still, price hikes and migration to higher tier packages helped subscription revenue in the United States rise.

“With content remaining as one of the main differentiating factors, spend to secure exclusive rights continues to soar placing added pressure on operator’s margins,” said Veale in a statement. “Furthermore, this is compounded by the increased competition stemming from a growing number of online platforms that includes Netflix and Amazon and increasingly the likes of Facebook and Twitter, all of which have significant war chests for content acquisitions. Combined, the FAANG companies are looking to spend around $20 billion on video content in 2018.”

Futuresource noted increased M&A activity in entertainment, such as Comcast’s recent bid for Sky and Disney move to acquire 21st Century Fox, are the result of increased competitiveness in the sector.

“Economies of scale have never been more critical, as content distributors and owners seek to maximise return on investment through broadening reach to the widest audience possible,” according to Futuresource. “Global conglomerates are increasingly operating with a fully integrated entertainment offering, not just video but also actively involved in creating content for the growing games market and ever tighter commercial links to the music sector. Consequently, they can maximize intellectual property returns across these ever more overlapping content divisions.”