The number of OTT video services used per OTT video user has risen to more than 7.2 different services per month in the United States, according to new data from London-based research firm Omdia. The increase in online video usage across the globe in 2020 has been driven by a greater uptake of subscription video platforms, which in turn has led to consumers to look for content across AVOD platforms.

Globally, the number of AVOD active monthly users has increased in 2020 compared with 2019. India leads the globe in terms of monthly active users on AVOD platforms with more than half a billion free AVOD users. The U.S. is second with nearly 200 million free AVOD users. Not only did monthly active users increase, but so did the frequency of viewing, highlighting a greater conversion rate to daily usage.

Nearly two-thirds of AVOD users access such services on the TV screen. In early 2020, smart-TV apps overtook the set-top box as the most used device to access free AVOD services. This was primarily driven by improved availability and greater usage of broadcaster VOD services on smart TVs in the U.K. and Germany.

The TV set is increasingly becoming a key medium for user-generated content. In 2020, nearly four in 10 YouTube users access the service on a TV screen via one of many connected devices the service is available on. Of those accessing the service via a TV screen, 63% used smart-TV apps. Video sharing app TikTok made its way to Samsung smart TVs in the U.K. in 2020, with further European launches expected in 2021. 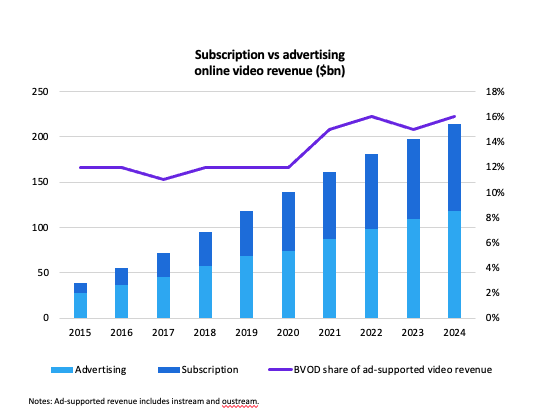 Over the next three years Omdia forecasts that global online advertising revenue is set to hit almost $120 billion, consistently outperforming subscription video services by just over 20%.

As linear-TV advertising revenue falls across many markets globally due to the rise of online video consumption, broadcasters have sought revenue by offering a ‘freemium’ content proposition online. Revenue is generated by incentivizing consumers to pay a monthly fee to upgrade or via advertising revenues from lower tiers.

The implications for commercial broadcasters mean that over time there will be more and more hybrid solutions coming into the market, where there is a balancing act between AVOD and SVOD models. Over the past few years, traditional broadcasters’ share of online video revenue has decreased due to the duopoly of Facebook and Google, however Omdia expects that their market share is to marginally increase over the next three years.

“AVOD users show a high propensity to consume content; they are content hungry, not cost conscious,” Begum said. “As on AVOD services grow in popularity and improve their content offering and device accessibility, paid services will have to work harder.”