The rise in AVOD and free ad-supported streaming TV use among consumers continued to attract viewers, marketers and generate commercials in the first half of 2021.

Connected TV accounted for 60% of total ad views with Roku and Fire TV devices continuing to lead market share with 43% and 26% of CTV views, respectively. Entertainment programming led the premium video ecosystem, with 92% of ad views, according to the report. 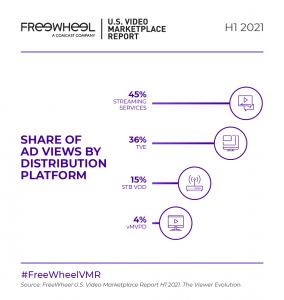 FreeWheel found that similarly to linear TV, digital platforms offer diverse content appealing to a broader consumer base, with 51% of ad views driven by live TV, with on-demand content at 37%.

Live content feeds are the cornerstone of the FAST business model and have become popular with consumers since they are free, have myriad channels selections, and limited commercials. According to a recent consumer survey, 20% of respondents said they would be interested in using free streaming platforms to replace their SVOD services. 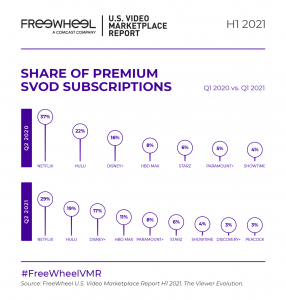 “New technology, political tensions and a global pandemic in 2020 transformed and accelerated how people access, consume and respond to media and advertising and we’ve seen this evolution continue into the first half of 2021,” read the report. “Advertisers, marketers and their content, distribution and technology partners can expect the change that was spurred in 2020 and is persisting into 2021 to continue, if not accelerate.”

“The industry is at the beginning of a long-term, data-driven evolution of how advertising and marketing are done,” read the report. “Keeping up in the industry will require a focus on the data that provides insight into viewer behavior and what impacts it, and enables the reach, targeting and reporting that marketers crave.”