The Walt Disney Co.’s upcoming subscription streaming service Disney+ will reportedly attract 22% of U.S. households when it launches in November, according to new data from Ampere Analysis.

The London research firm, which cited data based on a survey of 1,003 Internet users in the U.S., said 27% of respondents are familiar with Disney+ streaming service, despite minimal promotional activity to date.

There is greater awareness among the two audiences Ampere has identified as key for the Disney SVOD: 45% of 18 to 24-year olds and 36% of households with children were aware of Disney’s plan to launch a new streaming service.

The report found that nearly two thirds of these people fall into two distinct audiences – those in the 18 to 24-year old bracket, and households with children – with minimal crossover between them. 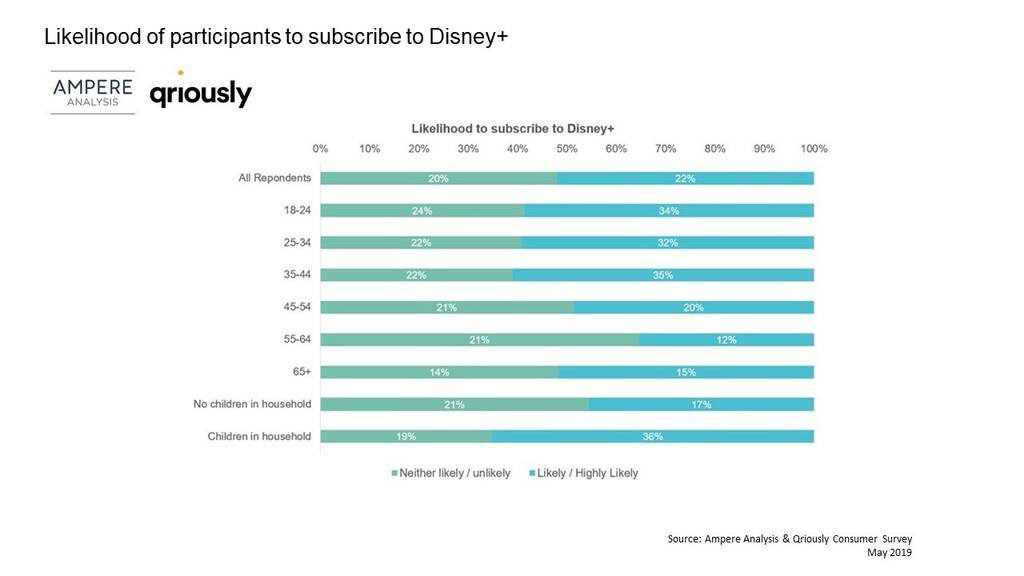 “There’s no question of a strong appetite for the Disney+ service – particularly amongst two distinct target audiences: households with children and 18 to 24-year olds,” Minal Mocha, consumer research lead at Ampere, said in a statement. “Away from this core group, there’s also a clear opportunity to broaden the content offering and attract a new audience by leveraging the Fox movie catalogue with titles such as Bohemian Rhapsody and The Post to reach an older audience.”

Ampere found that Marvel, Disney’s catalog of animated films, and Pixar titles were perceived as the most valuable content to gain access to via Disney+. Programmes available via broadcast or basic cable channels, such as the Simpsons and National Geographic were considered less crucial.

Marvel was ranked as the most important content to have as part of Disney+ for those 18 to 24.

The 25 to 34-year age group have the most affinity with Disney’s animated films. This age group not only is significantly more likely to have children in their household, but also to have built an emotional connection with these films in childhood.

Those aged 35+ are more likely to value Star Wars compared to younger audiences where it underperforms. The franchise will be key to attracting older audiences to the service – these groups of consumers may be less influenced by Disney’s animated titles, and by the Marvel franchise.