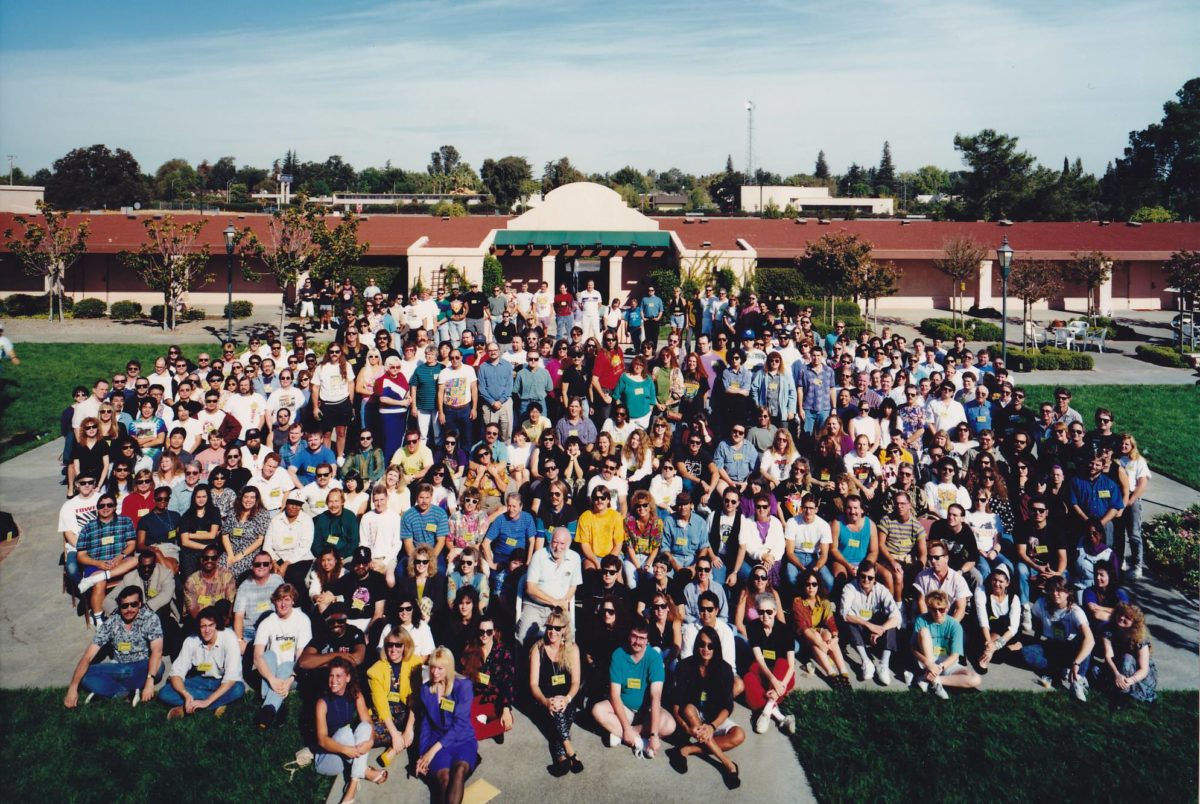 Russ Solomon surrounded by Tower employees at one of the chain's annual conferences. Photo courtesy of John Thrasher.

I’ve been thinking a lot about Russ Solomon over the last few days, ever since I heard about the celebrated Tower Records and Video founder’s death Sunday night while watching the Academy Awards.

At 92 years old, he was at his home in Sacramento, drinking whisky and complaining about someone’s outfit, his son told the Sacramento Bee.

What a way to go. Russ Solomon always did it his way – and while he and I only met sporadically over the last 30 years, once for a lengthy feature in Video Store Magazine and a few times to talk about DVD, the impact he had on me was monumental.

Indirectly, he fueled my passion and set me on a path to my career.

I was 13 and had just discovered music on my tiny AM ball-and-chain transistor radio. The record department at Montgomery Ward, where my parents shopped, was unimpressive. So I stuck with the top 40, tunes like “Mr. Big Stuff” and “Indian Reservation.”

A few years later, a Tower Records store opened near the San Diego Sports Arena, not far from my Point Loma home. I accompanied my mom, who was looking for some Johnny Cash and Ivan Rebroff records for my dad’s birthday.

I was wowed. Floored. Blown away. The music, the ambience, the posters, the long-haired young clerks who stood behind the counter, coolest of the cool, hippest of the hip. They played whatever they wanted to, dispensed advice freely to customers, often unsolicited, and each week wrote out their recommendations on hand-written dividers in the rock section.

I still remember their names: Bob White, Bob Davidson, Steve Lieber. I started hanging out and talking to them. They wound up turning me on to all sorts of great music – from Bob Dylan to Barclay James Harvest, from the Jefferson Airplane to Genesis, from old Phil Spector to the Strawbs. Elliott Murphy, Uriah Heep, the Byrds and the Left Banke.  I spent all my birthday and Christmas money at Tower, saving up for those glorious sales when any LP could be had for $3.66 – and select older ones, from Columbia and Epic, were two for five bucks.

I started writing a rock column for my high school paper, the El Cid – and then continued on in college, San Diego State, where my weekly Daily Aztec record review column, In Your Ear, got me on the promo lists of all the record companies and I was even invited up to Hollywood to meet with the college reps. I was an 18-year-old kid with thick glasses, polyester shirts, and a haircut straight out of Saturday Night Live’s “It’s Pat.” But I was treated like royalty – and on campus, whenever anyone recognized me from my picture, I felt like a star, even if recognition came from frat boys who wanted to kill me because I didn’t like Black Sabbath.

I had gone to college with the intention of becoming a lawyer. But because of Tower Records, I became a rock journalist, eventually writing for Billboard and the Los Angeles Times. I hung out with Cameron Crowe at the old Zebra Club in downtown San Diego, and babysat the Ramones on their first San Diego visit, taking them to their gig in my mom’s 1965 Impala and then to Jack-in-the-Box for their first taste of Mexican food (hey, I was a college kid and those tacos were all I could afford).

While in college I started a first magazine, Kicks: San Diego’s Only Rock ‘n’ Roll Magazine (yeah, I’ve come a long way!). My business classes helped me balance the books, but the guys at Tower helped me figure out what to write about.

After college, I decided that before I settled into the corporate world I’d give freelancing a try. I expanded beyond music and for the next decade was a prolific writer, penning everything from investigative features on unsolved murders for San Diego Magazine to concert reviews and a pop music column for the Los Angeles Times.

I was oblivious to the birth of the home video business; I was too much into music. All that changed, however, when a Tower Video store popped up across the street from Tower Records, in what is now the parking lot for The Home Depot. A collector at heart, I liked the fact that I could buy movies, not just rent them. I still remember my first videocassette purchase: The Joe Louis Story, for $9.97. I bought more videos, mostly cheap public domain stuff, and picked up a free video magazine with reviews of new releases. I started renting videos, since that was the only way to watch newly released films at the time. I also started writing for the magazine, which gave me clips I later used to land my first job, in November 1991, at Video Store Magazine.

I got to know all the leading retailers, including John Thrasher, Tower’s video guy. I got to interview his boss, Russ Solomon himself.  The video rental business was still booming; to my surprise, Solomon launched into a blistering attack on tape, calling it an “imperfect medium, a transition format.” The music industry had already transitioned from tape to digital disc – it was high time the home video industry did likewise, he told me.

That sparked my interest in getting movies on disc – a hot topic in the early 1990s. I watched and I chronicled the slow, bumpy path that eventually led to the launch of DVD in 1997. Before that, there was CD-I, a false start in which two discs were required for every movie, and oh by the way the blacks just didn’t come out right. And when the time came for DVD, I became one of the new format’s most enthusiastic champions. At the annual VSDA conventions, I frequently met with Warren Lieberfarb, the format’s chief architect, as well as the hand-picked cadre of like-minded industry leaders he surrounded himself with, Russ Solomon among them.

When DVD began to soar, I thought for sure Solomon, an early advocate of the sellthrough model, would prosper with it – but alas it was not to be. The mass merchants commandeered the business and used DVD as a loss leader to drive traffic into their stores. And Tower, already weakened on the music side by the record company’s bungled attempt to fight piracy by jacking up the list price of CDs and suing their customers, simply couldn’t take any more hits, particularly since the chain was saddled with debt from its too-swift expansion in the 1990s.

I remember seeing Solomon, in his trademark red-satin jacket, at a few more VSDA shows in the early 2000s, but before long it was all over. Tower went bankrupt for the second time in August 2006, and by the end of the year was in liquidation.

I never saw, or spoke with, Solomon again. But I think about him every time I drive by the old Tower Records building on Sunset – or the Tower Records across from the Sports Arena where I spent so much of my teenage life.

And if I had the chance to speak with him again, there’s no doubt what I would say: “Thank you.”