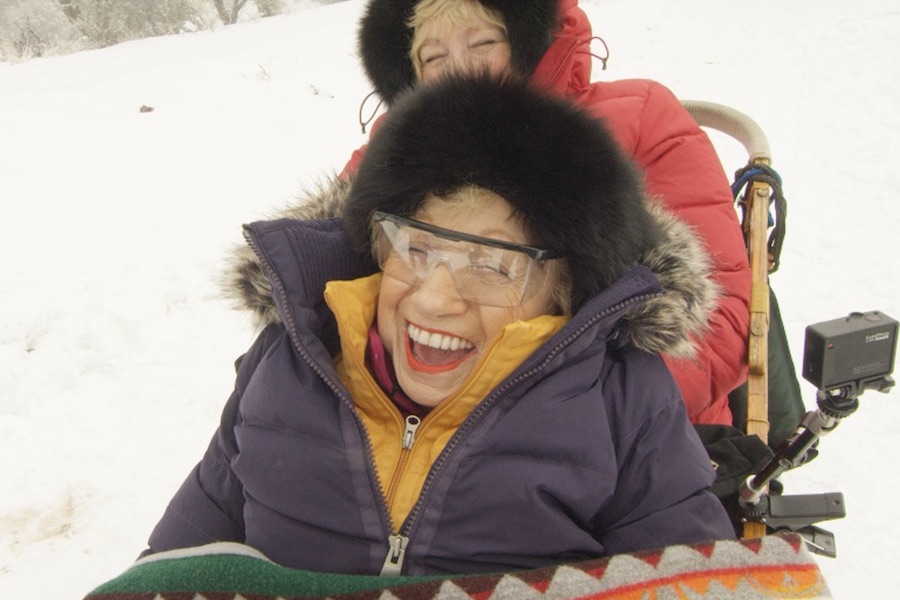 Author and media commentator Lillian Glass didn’t have to look far for the subject of her first film. She had a captivating story in her own family, the life of her centenarian mother, whose experiences and positive attitude offered as much drama and inspiration as a fictional saga.

Her documentary Reinventing Rosalee, about Rosalee Glass, who lives life to the fullest, will come out on digital, VOD and DVD May 7 from Random Media in time for Mother’s Day.

Despite having lost family in the Holocaust and labor camps, among other tragedies, Rosalee started taking piano lessons in her 80s, become a successful actress with a Super Bowl commercial in her 90s and, for her 100th birthday, released a book 100 Years of Wisdom and started an online life advice service. She celebrated her 102nd birthday on Jan. 28, 2019, with recognition by the mayor of Los Angeles and city council.

“It’s a lesson that it’s never too late to live your dream,” said the director of her film.

The documentary recounts both good times and bad in the life of Rosalee, who was sent to a Siberian gulag during World War II and lost her family in the Warsaw ghetto. She also lost two children in those early years, one to starvation and one to tuberculosis.

“I didn’t really realize the impact that the children that she lost had on her,” said her daughter. “It was quite severe.”

The director also found out about other struggles, including how Rosalee survived when her husband had tuberculosis and had to be taken to a hospital in Germany.

“She didn’t have money to see him,” her daughter said. “She took off her bra and made a pattern and started selling brassieres to people and was able to have the fare to go back and forth to see her husband. It’s inspiring, the kind of ingenuity that she had, just amazing strength and fortitude.”

For the documentary, Lillian Glass did extensive research on the fate of her mother’s family. In the Russian archives, she found out that Rosalee’s brother was pulled off a train, sentenced to hard labor and then sent into the Russian Army. That’s where the trail stops.

The rest of the family died in the Warsaw ghetto. The director and her mother visited the location of Rosalee’s former home for the film.

“We went to Poland and gave her relatives, her mother, her father, her sisters, who died in the Warsaw ghetto, an honorable burial, taking their photographs and burying them where they had lived,” the director said. “Her home was no longer there, but the area is, so we kind of buried it where the home would have been…. It was very emotional for her because this was the first time that she was able to grieve the loss of that family that she had.”

To recount Rosalee’s early life, the director had to get creative. “There’s no footage from back then, so one of the fun things I did was that Rosalee’s husband Abraham looked just like Cary Grant when he was younger, so I took a lot of public domain footage of Cary Grant movies and applied them appropriately and then I looked at 1926 Russian films where we got the gulags,” the director recalled.

The United States Holocaust Memorial Museum also helped her locate some of the footage.

“It was just really a lot of research and having been a professor and a researcher early in my life, I really see that those skill sets are very valuable as a film producer and director,” she said.

Further tragedy in Rosalee’s senior years, the death of her son in a medical malpractice incident after losing her husband of 60 years, almost broke her spirit.

“She became severely, severely, severely depressed,” her daughter recalled. “Then one day kind of like a miracle happened. She woke up and said, ‘I’m going to live life to the fullest,’ and what she did was like amazing. She started taking tango dancing lessons, piano lessons, tai chi, all these kinds of things she never did before, even an acting class and the acting teacher said she was so good that she should get an agent, which she did, and then she became an actress at 86. At 94, she won a beauty pageant, a senior beauty pageant, won Miss Congeniality in the Senior California Pageant. She then at 97 starred in a Super Bowl commercial, and at 99 wrote this book and at 100, she rode the dogsled in Alaska. At 101, she went to the Cannes Film Festival, and now she’s going to premieres and everything regarding her film.”

The film has won more than 40 awards throughout the world, the director said, and it has also inspired moviegoers.

“One person who saw the film hadn’t spoken to his mother in 10 years,” the director said. “He then picked up the phone and talked to her and immediately made a reservation and flew there the next day. Another brother and sister didn’t talk to both of their parents for many, many years and made up after seeing this film.”

Rosalee’s life is a lesson in hope and having a positive attitude, the director said, noting that her mother harbors no hate as she embarks on new experiences.

“It shows you that it’s never too late to just try things, take risks, live your dream and that bad times don’t last forever,” the director said.