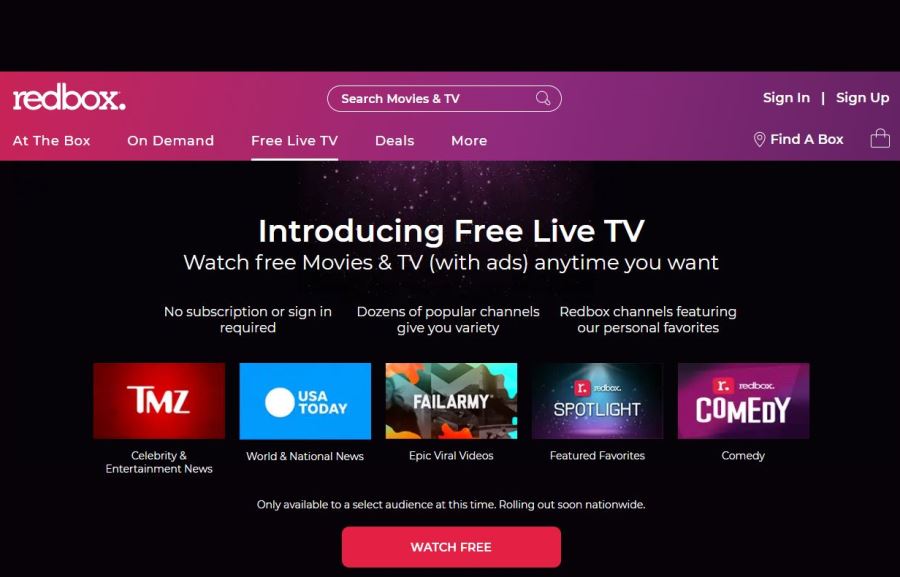 The service, meant to complement the company’s digital and packaged-media strategies, now has an official name, Redbox Free Live TV, and after a brief test has been rolled out nationally, with nearly 30 channels of movies, episodic series and Web shorts including three exclusive Redbox-branded channels.

Similar to ViacomCBS’s Pluto TV, Redbox Free Live TV serves up content in the same way as a regular broadcast TV channel, with scheduled show times rather than on demand.

“This is available everywhere, now,” Galen Smith, CEO of Redbox, told Media Play News. “We’re trying to do what no one else does — meeting the content needs of our customers wherever and however we can. They can get the latest releases, at the best prices, at our kiosks; they can watch content instantly, digitally; and now we are giving our value-loving customers something more, which is free live TV.”

New devices are launching in the coming weeks, Smith said.

Accompanying Redbox Free Live TV is the launch of three Redbox-branded channels featuring content from a variety of studios and content owners including Lionsgate, a key strategic launch partner for programming content.

Smith said is looking at launching 10 additional channels every month, and building on the current team of 16 content providers, as well.

“The expansion of Redbox into live streaming television builds on the company’s commitment to being the go-to entertainment destination for consumers wanting choice and amazing value,” Smith said in a statement. “With Free Live TV, we’re now offering an unparalleled level of content choice through our kiosks, on-demand and now free streaming. We know what consumers want to watch and Free Live TV expands the ability to reach consumers and tap into the growing OTT market.”

With the launch of Redbox Free Live TV, the company continues to transform itself into a multi-channel content provider and programmer. Last year, Redbox launched Redbox Entertainment, a new division to produce and distribute original content across its service.