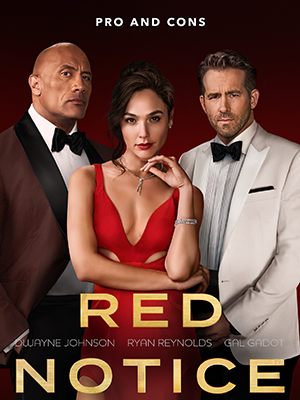 Netflix’s Red Notice is a glitzy heist movie that mixes action and comedy well enough, but mostly coasts on the charisma of its stars.

Ryan Reynolds plays Booth, who wants to earn the reputation as the world’s greatest thief. Gal Gadot is his rival, The Bishop. Dwayne Johnson plays FBI agent Hartley, who is on the hunt for them and tracks Booth to a scheme to steal a bejeweled egg from thousands of years ago.

The egg is one of a set of three presented to Cleopatra by Mark Antony. An Egyptian billionaire has offered $300 million to anyone who can deliver all three, but only two have been uncovered in modern times; the whereabouts of the third remain a mystery.

Hartley manages to capture Booth and recover the egg, but is himself framed when it is stolen again and sent to prison. Hoping to clear his name, Hartley decides to recover the remaining eggs by teaming with Booth, who may have the only clue as to the location of the missing third one.

But, alas, The Bishop is also after the eggs, and always appears to be one step ahead of them.

The team of Booth and Hartley plays like a buddy comedy mixed with Ocean’s Eleven and the treasure hunting sensibilities of Indiana Jones. The film isn’t exactly trying to hide its inspirations, either. Reynolds even whistles the Indiana Jones theme at one point as the trail leads the plot into an expedition deep in the South American jungle.

The film intermingles plot twists with over-the-top action to create an entertaining if overblown spectacle, though its clear the cast had a lot of fun making it.