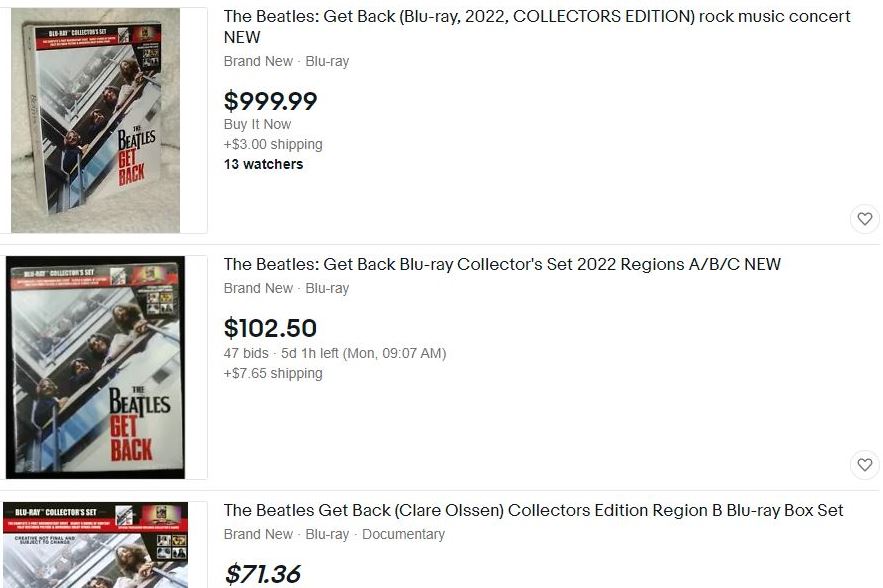 Copies of the recalled The Beatles: Get Back documentary on Blu-ray Disc are a hot commodity on eBay, where they are being offered for as much as $999.99.

The docuseries, which was supposed to be released Feb. 8, was yanked by Disney due to a technical glitch. But some copies still found their way into stores, including a Target in Orange County, Calif., where several copies were spotted in the new-release section.

Media Play News had reported that shoppers were not able to actually buy copies of Peter Jackson’s acclaimed documentary on the legendary British rock band, with any potential sale flagged by checkout computers.

But apparently some copies still found their way into the public’s hands. An early morning check of eBay, the online auction site, found 14 copies of Get Back listed for sale, at prices as high as $999.99.

Under “completed auctions,” there were several successful sales, including one for $399.99 that sold on Feb. 7, the day before the Blu-ray Disc was supposed to be released.

The initial release date was slated for nine days after an hour-long concert film of the group’s iconic 1969 rooftop concert was released at select Imax theaters on Jan. 30, the 53rd anniversary of the performance atop the Apple Corps’ Savile Row headquarters. The concert film includes a Q&A with director Jackson, who said in a statement, “I’m thrilled that the rooftop concert from The Beatles: Get Back is going to be experienced in Imax, on that huge screen. It’s The Beatles’ last concert, and it’s the absolute perfect way to see and hear it.”

The concert, which is included in the documentary, has been digitally remastered with proprietary Imax DMR (digital remastering) technology.

The Imax event was followed by a global theatrical run of the 60-minute concert film that began Feb. 11 and ran through the weekend.

The Beatles: Get Back covers the making of the Beatles’ 1970 album Let It Be, whose working title was Get Back. Originally conceived as a feature film, The Beatles: Get Back was expanded into three episodes with a total runtime of nearly eight hours. The docuseries, which premiered on Disney+ Nov. 25, was compiled from nearly 60 hours of unseen footage shot over 21 days, directed by Michael Lindsay-Hogg in 1969, and from more than 150 hours of unheard audio, most of which has been locked in a vault for over half a century, according to a press release.