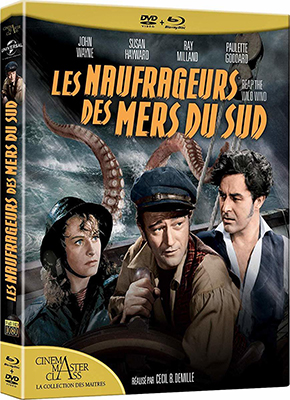 My most educated guess is that Cecil B. DeMille’s Reap the Wild Wind may have been Paramount’s third-highest grosser of Hollywood’s entire World War II era, given that the starry mountain’s productions of For Whom the Bell Tolls (1943) and Going My Way (1944) were close to the top performers released by any studio in those two respective years (with a nod to Warner’s This Is the Army). But with more assurance, I can tell you that for pushing 60 years now, Reap has been my favorite DeMille movie except for his The Ten Commandments swan song — which, after all, does boasts Edward G. Robinson’s gonzo Dathan and the chance to see hot couple John Derek and Debra Paget falling under the Golden Calf’s pernicious influence and upping their boogie quotient. Plus, one must concede, the artful constipation Charlton Heston brought to every role he played, and in this case, beneficially.

On the other hand, 1942’s Reap has a fabulous cast delivering in the goods via (in some cases) admittedly 19th-century theatrical acting styles — and this is before we even get to the best giant squid the studio could cough up for the industry’s No. 1 cash-cow director. I do wish that this seafaring blockbuster with an occasional julep twist didn’t overextend the footage allotted to an un-blamable Louise Beavers in another of those “wasn’t slavery fun?” roles — but this was an inevitable by-product of the 1840’s Dixie setting (by way of the Florida Keys) and Paramount’s desire to fashion Reap as its answer to the Margaret Mitchell/Selznick/MGM Gone With the Wind. At least Beavers, a la Wind’s Hattie McDaniel, gets to make with the sass while futilely trying to turn the sometimes tomboy-ish babe of the house (here, it’s Paulette Godard, who’d been a finalist for the Scarlett O’Hara role) into a lady. And for that matter, you know going in (or should) that DeMille wasn’t, just on general principles, the most racially sensitive filmmaker who ever lived, though I have always dug the showmanship chutzpah he exhibited by casting Boris Karloff as a Seneca chief in Unconquered.

You also know (or should surmise) that John Wayne had to be hitting the top of the Big-Time when the movies’ most successful director (DeMille’s name on a marquee was more potent than that of most stars) in one of his most lavish productions just three years after the Duke’s breakthrough in Stagecoach. As it turned out, the picture gave Wayne one of the most interesting roles of his career (though maybe not as interesting as his Genghis Khan camp-fest turn in The Conqueror) in that it was the closest time that he ever came to playing a villain. In the truth, the picture kind of splits the difference: Though Wayne plays a wronged sea captain successfully tempted by circumstances to perform a dastardly act, he remains a sympathetic figure and certainly a co-equal to dandy lawyer Ray Milland for the hand of Goddard, who impetuously plays one against the other with a level of guile that’s never totally clear (which makes it interesting).

We open in the Keys with Wayne knocked cold under the orchestration of his first mate — a covert lackey, turns out, of Raymond Massey’s crooked lawyer (think a more WASP-ish version of Roy Cohn in the pre-Civil War South) who’s gotten financially fat from a ship-salvaging business whose services include wrecking the vessels in the first place. The busted-up ship currently in question is owned by Goddard, who’s inherited the business and immediately falls hard for Wayne after rescuing him amid his on-board stupor and protestations that he hasn’t a clue what happened. This is all true enough, and Wayne’s perfidy comes later — but not until after he gets embroiled in said love triangle after Goddard subsequently visits her aunt in Charleston and meets company attorney Milland, whom she initially despises because he’s understandably casting a wary eye at Wayne’s sailing prowess. The two men have some history.

The movie positions Milland as the lace-favoring type who’s good at tony social affairs where sopranos entertain but is actually a pretty accessible guy. In fact, when he throws the movie’s first punch (of many), he actually decks Wayne. The two make fairly civil adversaries, and it’s fun to watch them, as is enjoying a remarkable supporting cast (Lynne Overman in whiskers, not long before his death?), round out the package. In one of those remarkable casting breaks that can add to a movie’s currency with passing years, two of the key subordinate roles go to actors who later became very big stars: Susan Hayward and Robert Preston. This packaging of this All-Region disc, which is among the most beautiful I’ve ever seen of a vintage Technicolor movie, reflects the changing fortunes of its actors, billing Wayne, Hayward, Milland and Goddard in that order. It’s the same order they appeared in when Reap was re-issued in (pretty sure) 1954, and I marveled at the ads in the Cleveland Plain Dealer, when I would have been 6 or an early 7. This is a movie I wanted to see very early on, and it did not let me down (even in black-and-white) when I saw its local TV premiere on a late, late show in 1960.

The climactic squid mayhem probably ensured the smash box office, though if ’54 was indeed the re-issue year, I wonder how Walt Disney felt about its impact on that coming Christmas’s 20,000 Leagues Under the Sea — whether, that is, it would diminish the newer picture’s key selling point or whet audiences appetites to see additional name actors battling those tentacles. Like Jaws the shark, DeMille’s creature looks mechanical yet cool all the same — and, in fact, Reap was kind of the Jaws of its day. Though even before this “money” climax, there’s a long and outlandish late-movie trial scene which, by comparison, makes the jurisprudence in The Man Who Shot Liberty Valance look as dignified and legally stable as, say, the white-wig stuff in Hitchcock’s The Paradine Case or Robert Donat in The Winslow Boy.

As mentioned, this is one beautiful print, and I say this as one who saw UCLA’s 35mm archival copy of Reap maybe three times as programmer for the AFI Theater and a couple times via a collector’ friend’s 16mm IB holding. At long last, though not yet in the U.S, some of these Universal-controlled DeMille Paramounts are making their way to Blu-ray, albeit just in time for most of the director’s biggest fans to be dead. Reap distributor Elephant Films has itself recently brought out the uncut Sign of the Cross and Technicolor Unconquered, the latter featuring the sight of Goddard tumbling down a monster waterfall in a canoe with Gary Cooper. A Big Drink tumble, a squid, the Golden Calf, a lion’s lunch of Nero-offending Christians: in his day — which I concede isn’t always to-day — DeMille knew what audiences craved even more than their Milk Duds and the theater’s free air-conditioning.