A quarter of U.S. Internet users now rely on a mix of ad-supported video-on-demand (AVOD) and subscription video-on-demand (SVOD) services for their entertainment, according to research firm Ampere Analysis.

The quality and popularity of SVOD services is typically driven by their exclusive titles whereas AVOD services tend to rely on high volumes of non-exclusive content from major studios to bolster the quality perception of their catalogs, according to Ampere.

“Ampere’s analysis demonstrates the potential for AVOD services to co-exist with well-established subscription services and offer a cheaper way to view content online for price-sensitive consumers,” according to Ampere. 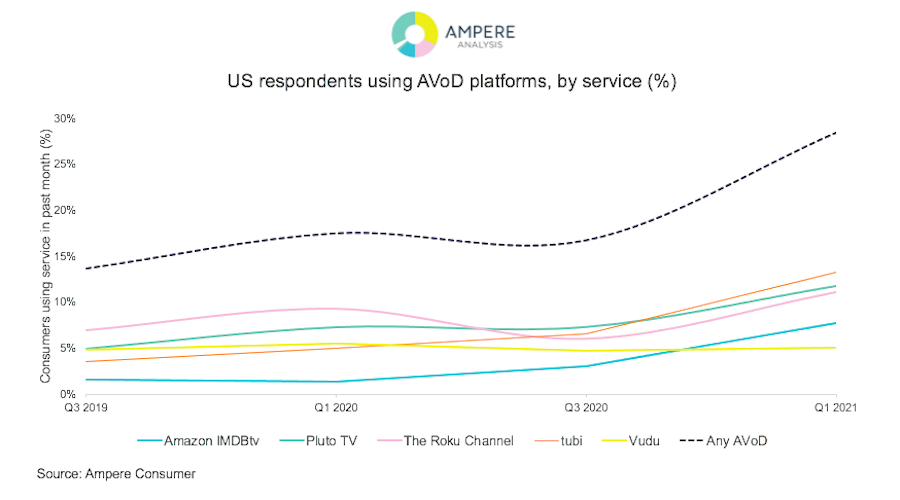 AVOD viewers tend to be older and less affluent than their SVOD counterparts and tend not to stack multiple SVOD services, preferring traditional pay-TV packages. In the study, older users (ages 55-64 years old) were the fastest-growing age bracket of AVOD viewers, with a seven-percentage-point increase in AVOD uptake among the group in the last year alone. This was also the fastest-growing age bracket for SVOD, but due to the greater maturity of the SVOD market, saw the cohort post just a 3.5 percentage point growth in the last year.

“We can see the appeal with older audiences at present, but AVOD services will need to compete more directly with the content on SVOD if they want to attract the younger, more affluent audience already familiar with SVOD,” said Ampere analyst Tom Bell.

U.S. AVOD catalogs are large — but are primarily made up of older, non-exclusive titles, according to Ampere. While SVOD services typically rely on their vast catalog of exclusive titles to increase the quality and popularity of their content offering, this is not the case for AVOD services. The quality and popularity of AVOD catalogs is driven mainly by non-exclusive content, with their large catalogs made up of a much higher proportion of studio titles that are also licensed to other services.

All major SVOD services in the United States offer some content that is available on AVOD for free, according to Ampere. Amazon, Hulu and Peacock have a significant amount of content that is also available via AVOD services. In total, 12% of titles on SVOD are also available on a free AVOD platform in the United States. However, a small number of platforms account for the majority of the overlap between SVOD and AVOD. Amazon Prime Video has the greatest overlap with Fox-owned AVOD service Tubi, with 6,600 titles shared between the two services; over 90% of these are lower-value movies. This is followed by NBCU-backed Peacock, with 715 titles available free on Tubi, with the majority of these also available via Peacock’s free AVOD tier.

Looking ahead, the AVOD players are starting to move into original programming to differentiate their catalogs and reduce reliance on licensed content, Ampere noted. Roku, Vudu, Crackle and IMDb TV have all begun to commission original programming, focusing primarily on documentary and comedy titles. Rival service Tubi has also committed to original productions, targeting 140 hours of new original content in late 2021.

“As studios are reserving an increasing proportion of their content for their own platforms, AVOD platforms are beginning to follow suit and commission their own originals,” Bell said in a statement. “While content exclusivity remains a key difference in strategy between AVOD and SVOD platforms, these early moves into original commissioning bring AVOD players a step closer to increasing their catalog exclusivity and quality and differentiating themselves in a crowded market.”