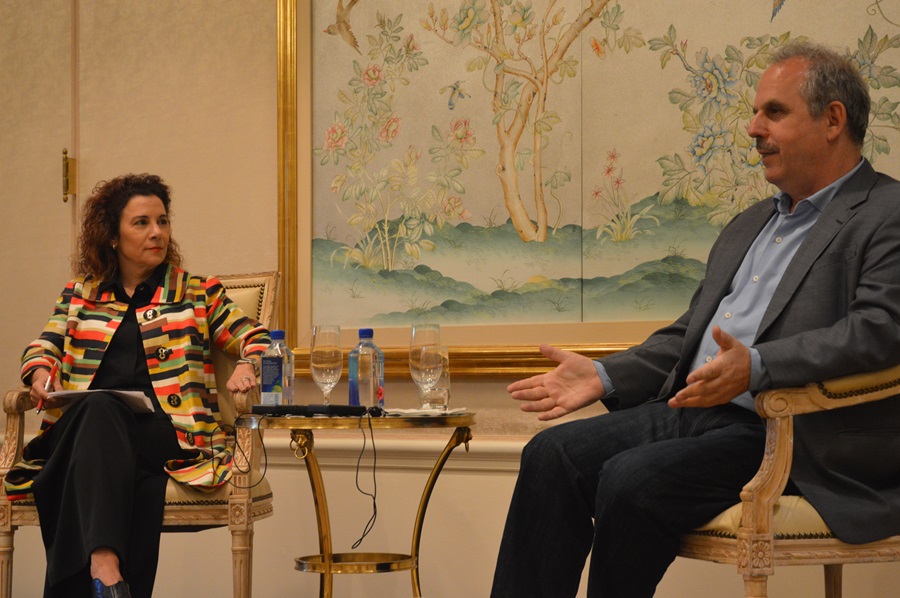 Producer and former studio executive Bill Mechanic discussed his long career and the changes rocking Hollywood June 12 at the Peninsula Beverly Hills during a talk presented by DEG: The Digital Entertainment Group’s Canon Club and sponsored by Deloitte.

Mechanic ran what was then the home video unit at Walt Disney Studios from 1984 until 1994. Under his watch, the division grew from $30 million to more than $3 billion and brought to market some of the top-selling home video releases of all time, including Aladdin, which in its first three weeks of VHS release sold more than 16 million units. Mechanic also pioneered direct selling to mass merchants and Disney’s celebrated “moratorium” strategy, in which an animated classic is only available for a limited time before it is returned to the vault. From 1994 to 2000, he was chairman and CEO of Fox Filmed Entertainment. Currently, he produces movies through his independent production company, Pandemonium Films, which in 2016 released Hacksaw Ridge, directed by Mel Gibson, earning him an Oscar nomination.

Speaking at the Peninsula Beverly Hills, Mechanic said that as an executive at Disney, he decided the stories for girls needed an update after having a daughter himself.

“As much as I love the animated films, once my daughter was born I thought, ‘Well, they’re not really good for her.’ That ‘some day my prince will come to save me,’ essentially, which is the story of almost every one of the Disney films, I thought was a bad narrative,” he said. “I didn’t want my daughter waiting for a prince to save her.”

He also hired women at the studio, noting “like 50% of executives at Disney were women.”

“I found the women worked harder, wanted to prove themselves more, put less ego out front and were just in there driven to do their jobs,” he said. “They just made better executives.”

Women also are the primary decisionmakers in what movies to see, he noted, which prompted him to form a division at Fox.

“My working name for Fox 2000 was ‘The Women’s Division’ because at that point there were no women running production,” he said. “There was not a real female point of view.”

He added, “It wasn’t to make women’s films per se. It was to put the women’s perspective in things.”

He also made films with women protagonists, such as Bad Girls, and worked with female producers, such as Drew Barrymore, and female directors, such as Kathryn Bigelow and Betty Thomas.

Likewise, he broke ground with black audiences. Having grown up in Detroit, where he often was “the only white in a black theater,” Mechanic noted he learned about that market. He went on to produce such movies as Waiting to Exhale, which he convinced the studio to release in the suburban market, instead of just the usual collection of black theaters. The film ended up making millions more than it would have if the distribution had been restricted, he noted.

Nevertheless, Mechanic has been critical of the Academy of Motion Picture Arts and Sciences, and left the organization’s Board of Governors in April with a resignation letter blasting its diversity push.

Referring to the #Oscars So White controversy on Twitter about the lack of diversity in the awards, he said, “Oscars So White  and we’re going to all of a sudden break all of our standards. We’re going to double the size of the Academy. It’s changing what you’re doing instead of going to the root of the problem.”

The solution, he said, is promoting diversity in the business from the ground up.

“Go to the root of the problem. Hire people. Start training programs. Do things that change the basics of what your pool of talent is and don’t sit there and do knee-jerk reactions,” he said.

As for the sexual harassment debacle in Hollywood, he said producers and executives need to take charge.

“You’re job isn’t to let things happen that are bad,” he said.

Still, he questioned how far the industry should go in policing morality.

“I loved City Lights,” he noted, directed by and starring Charlie Chaplin. “I started reading his biography, and he was a pervert.”

“Are you not going to listen to Wagner because he was a racist? Are you going to ban D.W. Griffith because of Birth of a Nation?” he asked.

He said there should be some mercy afforded to those who make mistakes, referencing Mel Gibson’s tabloid scandal.

“I think there should be forgiveness,” he said. “Everybody makes mistakes. I put Mel back to work. Ten years is a long time to pay for transgressions.”

Still, he noted, “If you continue the transgressions, there’s no coming back from that.”

As for the current state of entertainment, Mechanic said he is looking for a phoenix-like rebirth of creativity, similar to what happened to American film in the 1930s and 1970s, but he has seen no sign of it yet. He lamented the focus on big-budget franchises and indie award bait to the exclusion of mid-budget productions.

“Right now, the movie business is Rio De Janeiro, and you’ve got bodegas and you’ve got penthouses and there’s a street in between and there are no houses on that street,” Mechanic said, noting “nobody wants to finance” mid-budget movies.

On a day the giant AT&T-Time Warner merger took a big step toward completion with a court victory, Mechanic lamented the effect of conglomerates on content, noting they care only about filling their distribution pipeline.

“The owners of the companies are not in the business that I’m in or I was in,” he said. “They don’t care about the movies. Nobody calls them movies. They call them IPs.”

He said remakes and gender-flip films, such as Oceans 8 and Ghostbusters, are produced “for marketing purposes.”

“It cuts through the clutter,” he said. “People are making brands. They’re not making movies.”

On the rise of subscription streaming services, Mechanic said, “People don’t want to make decisions, so subscription always works better than any kind of transactional thing because you have to make a decision [on what to pay for].”

Still, he cautioned being too intimidated by the rise of services such as Netflix.

“The monster that devoured Hollywood was HBO in 1990 something, and then it was Blockbuster. So there’s always the next monster that’s going to devour Hollywood. Right now, it’s Netflix,” he said.

He noted that Netflix’s growth had plateaued domestically, but he did laud the quality of originals, such as “The Handmaid’s Tale,” on SVOD services.

He said studio executives should ask themselves, “Why are those so good and what you’re making so empty-headed?”

His criticism was not only reserved for studio theatrical divisions; Mechanic also questioned the decisions of the home entertainment industry.

“I think six or seven companies had their head in the sand for the last decade,” he said. “They introduced Blu-ray, which wasn’t any kind of real improvement over DVD. Then all of a sudden you’re collapsing your windows. Why? For a business that doesn’t exist. Why? What did that get you? All you did was destroy the confidence of the consumer.”