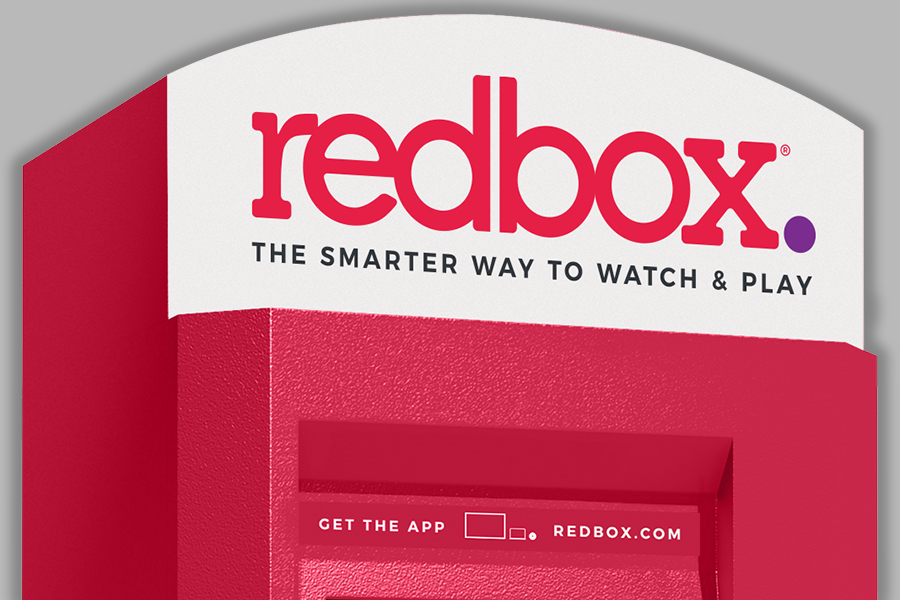 In a tumultuous year of pandemic and protest, Redbox marketers decided to act. As the Black Lives Matter protests emerged over the summer, the company quickly mounted a campaign called “Black Voices. Black Stories.” And, as the world seemed particularly threatening, Redbox decided to celebrate National Do Something Nice Day Oct. 5 by extending the celebration for an entire week.

■ Do Something Nice Weeklong Campaign

During COVID, Redbox decided to celebrate Do Something Nice Day, Oct. 5, for an entire week from Oct. 5-11 to help lift the spirits of customers stuck at home and enjoying movie nights, one of the few escapes during this time. 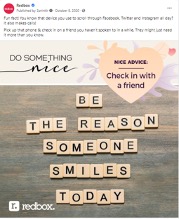 Redbox encouraged people to observe the day by extending kindness to others, for instance picking up a neighbor’s newspaper, giving up your place in line to someone with fewer items, giving a compliment, or buying an extra coffee for a friend or family member. The point was to celebrate small acts of kindness and recognize that even the smallest gestures can make a big difference.

Each day, the company also offered some “nice advice” for people to spread the good vibes, with suggestions to check on a friend (and share the daily Redbox offer) or to recognize a colleague.

The campaign included email, SMS, social media, Web and app support. Redbox also created awareness on its Free Live TV platform by including teasers to enjoin viewers to continue to tune in to see the next day’s offer.

The campaign — designed to bring something positive to as many people as possible — engaged more than 250,000 customers throughout the week.

“In a year of upheaval, Redbox focused on being a constant, reliable and welcome source of entertainment for our millions of customers,” said Chris Bingel, director of loyalty and database marketing at Redbox. “Highlighting National Do Something Nice Day and expanding the program into a full week was a nice way to surprise and delight our customers with messages of kindness that they could in turn pass along to brighten the day for their friends and families. This was also one of the first comprehensive campaigns that highlighted our full offering of physical and digital movies and TV shows, which we promoted with all of our outbound channels.”

The “Black Voices. Black Stories.” campaign launched in June 2020 and is an ongoing initiative across all of the Redbox platforms — kiosk, On Demand and Free Live TV. The initiative was created in solidarity with the Black Lives Matter movement and the growing social unrest that focused a spotlight on the injustices African-Americans regularly contend with. The goal of the initiative is to provide a space for Redbox customers to learn more about the black experience through content created by and starring black talent.

Underscoring the importance of this movement, several studio partners (Warner Bros., Paramount, Fox/Disney, Universal, Sony and Lionsgate) showed their commitment by offering free On Demand rentals on select titles. The following movies were free throughout the month of June: Just Mercy, Selma, Antwone Fisher, The Secret Life of Bees, Brian Banks, Ali, The Hate U Give, Monsters and Men and Blindspotting. In a major move, Warner Bros. also extended Just Mercy to be available to rent for free at the kiosks.

Because this was the first time that studios offered free On Demand content, Redbox’s Content Operations team had to expedite development work on the company’s platforms to make this content available for no charge to customers. Also, Redbox’s creative team had to develop a campaign quickly. Within one hour of getting the call from Warner Bros. about Just Mercy, Redbox went live with the free offer.

The initiative was featured across the Redbox network, including email, kiosk banners, push notification, Web support, social, and the company’s “Unscripted” blog. Marketers also developed the “Black Voices. Black Stories.” reel and landing page to curate a collection of movies that would engage and educate customers about the black experience. The movies range from stories on famous historical figures and lesser-known pioneers, to films derived from fictional novels and real-life groundbreaking events.