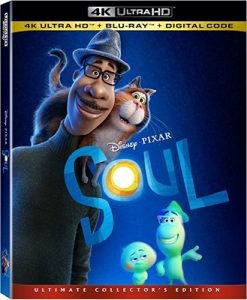 Directed by Academy Award winner Pete Docter, co-directed by Kemp Powers and produced by Academy Award nominee Dana Murray, Soul tells the story of Joe (voiced by Jamie Foxx), who lands the gig of his life at the best jazz club in town. But one misstep lands Joe in a fantastical place: The Great Before. There, he teams up with soul 22 (Tina Fey), and together they find the answers to some of life’s biggest questions.

The latest feature from Pixar Animation Studios was held back from its planned domestic theatrical release as a result of the coronavirus pandemic and instead was made available to subscribers of the Disney+ streaming service on Christmas for no additional charge. In limited release internationally it made $85.2 million at the global box office.

Extras on the disc and digital versions (subject to retailer) include filmmaker commentary; deleted scenes with introduction; and several featurettes:

Soul will also be available as a collectible Steelbook at Best Buy, and packaged with a limited-edition gallery booklet at Target.