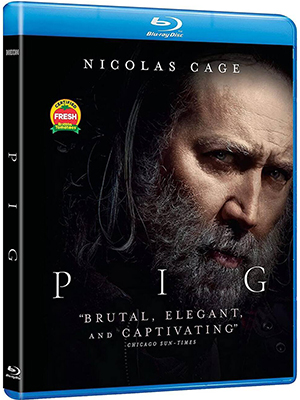 A smoldering Nicolas Cage performance highlights this mesmerizing tale of a man’s quest to recover his beloved pet pig, which he uses to make a living digging up and selling truffles.

Cage plays a former gourmet chef who has turned to a life of seclusion in the woods of Oregon. He makes a living using his pig to sniff out truffles, which he sells to Amir (Alex Wolff). However, one day he is attacked and the pig is stolen, leaving him desperate to find her.

With Amir’s help, he returns to Portland to reconnect with the network of contacts he thought he left behind, seeking clues to the whereabouts of his beloved pig.

Cage’s quiet, seething intensity in the role and the way the plot uses a pet to drive the main character’s motivation would at first blush seem to set the movie up to be a sort of “John Wick with a pig” type of movie. But that’s not what it ends up being. The film is more of a dramatic meditation on the nature of loss, the pitfalls of the culinary world, and finding purpose in even the simplest aspects of life.

The Blu-ray offers a few interesting bonus materials, including two cooking segments with Cage that run about 20 minutes each. Seeing Cage’s fascination with the culinary techniques is almost worth picking up the Blu-ray on its own.

There are also three superfluous deleted scenes that run seven minutes in total.