New Parks Associates data confirms that pay-TV subscriptions and revenues are on a continuous decline as consumers embrace OTT video services. The Dallas-based research firm forecasts that traditional pay-TV will decline to 76.7 million households by 2024, the lowest penetration in a decade and a 27% drop from 2014. 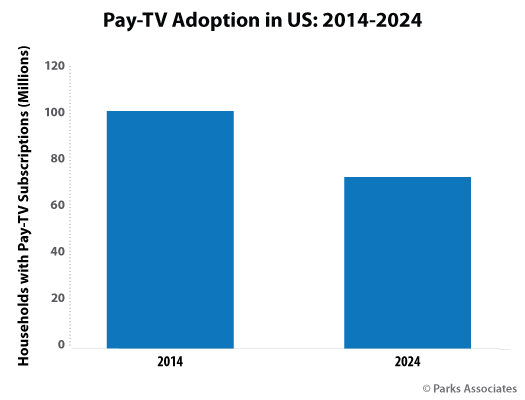 “Streaming’s debut changed the trajectory of the modern video service industry,” Paul Erickson, director of research, said in a statement. “The ease of [service] trialing, subscribing, and cancelling services has created new dynamics and challenges for content companies and service providers.”

Traditional pay-TV companies are making their move to streaming and are rebranding, making big acquisitions, and forming new partnerships. As they enter the streaming market, new OTT services join more than three hundred direct-to-consumer streaming platforms in the U.S. market alone, according Parks.

With so much choice and no long-term contracts required for streaming video services, churn across all OTT service providers is increasing, and services are struggling to retain their viewers. Parks’ data suggests that OTT subscription services averaged a 48% churn rate in the first quarter of 2022, which is a 10% increase in just two years.