The proliferation of over-the-top video services caters to niche audiences, correct? Not so much.

New survey data from Parks Associates finds that U.S. broadband households, who despite favoring at least one particular type of content genre, spend 70% of their streaming time on average on services with a broad variety of content, such as Netflix, Tubi or AMC+. Specifically, 44% of 5,000 respondents spend 76% or more of their streaming time on broad-based services, while 48% spend 25% or less on niche services. 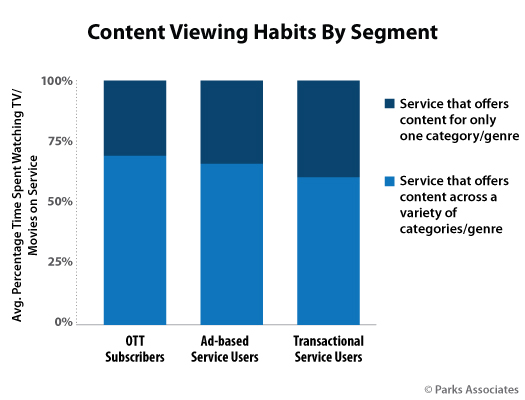 “Services offering a variety of content categories are the foundation of consumers’ video service ensembles,” senior analyst Paul Erickson said in a statement.

Erickson contends that despite niche services such as Shudder, Britbox and Crunchyroll dedicated to horror, British, and anime content, general entertainment platforms rule the conversation.

“[Niche services] are unlikely to be the primary, foundational content source within a household,” he said.

Ad-based services in particular have broadened their market appeal over the past few years by incorporating different genre categories. Crackle has made significant additions to its nonfiction content, Pluto TV has added several sports channels, and Tubi TV highlights children’s programming with its “Tubi Kids” section, according to Parks.

“If services are to challenge Netflix, Amazon Prime Video and Hulu, they need to feature a variety of programming across genres,” Erickson said. “We will see more bundling services emerge like AMC, which bundled together its niche services Shudder, Sundance Now, and IFC Films under the AMC+ service umbrella in order to give viewers more options.”

The research also finds that while “content is king,” cost is still the leading factor when consumers choose an OTT service. Fifty percent of respondents cite service cost as a key determination in the services that they use to access online video content. In response, key services have experimented with diversified pricing options. Disney+ has introduced transactional purchases, while Peacock is incorporating an AVOD option, and HBO Max and Paramount+ offer less-expensive ad-supported tiers.