New data from Parks Associates research finds that, as of May 2020, 8% of U.S. broadband households canceled at least one video service due to the COVID-19 crisis, including 4% of that canceled a traditional pay-TV service, due in large part to the cancellation of sports programming.

“The lack of sports programming had a significant role in households canceling their pay-TV services early in the pandemic,” senior director Jennifer Kent said in a statement.

Kent contends that with all major sports leagues now resuming play, consumer adoption should bring back many of these canceled households, especially online TV subscribers, who have an easier path to re-subscribe compared to traditional pay-TV.

“However, the ongoing economic crisis could push additional households to trim services,” Kent said. “Service and video providers are shifting to focus on retention and finding ways to keep subscribers through innovative partnerships and unique content.” 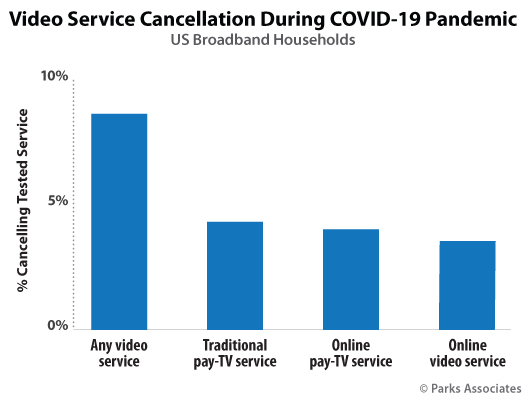 Parks reports more than 40% of former pay-TV subs said they would re-subscribe once sports resumed, while more than two-thirds of former online pay-TV subscribers would sign back on.