Currently, 82% of U.S. broadband households subscribe to an OTT service, and OTT service stacking has grown exponentially as new services such as Paramount+ launch, according to the Dallas-based research firm. As cord-cutters migrate away from traditional pay-TV, they increasingly seek video service offerings that more closely meet their content needs, with the added value of lower cost and flexible use cases.

Parks notes that cord cutters used to spend $117 per month on pay-TV services and are now paying $85 per month for OTT video services. 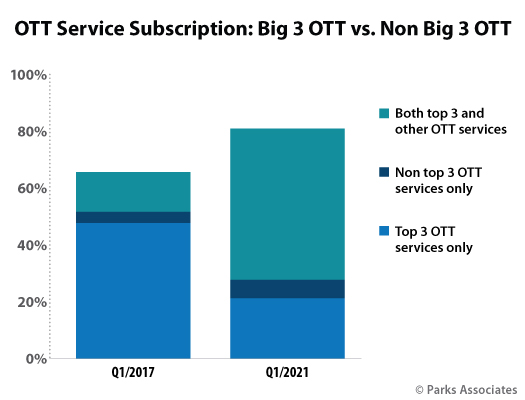 “Subscription fatigue and ad intolerance are pervasive in the streaming industry, and consumers are becoming more selective about where they spend their time and money,” said Lexie Knauer, senior product marketing manager at Brightcove, which contributed to the report. “It’s important for streaming services to go to market with a strong acquisition strategy to clearly promote the value of their content across the right channels and ultimately capture their target audience.”

“I think this [data] helps services with a clear identity, while others will need to clarify how they fit into the customer’s bundle,” Ribero said. “And I believe this has downstream ramifications especially for discovering new shows and content.”