“High cost is the most prominent issue driving households to cut the cord and go mobile only, although service-related issues, from slow speeds to poor customer experience, also contribute,” analyst Kristen Hanich said in a statement. 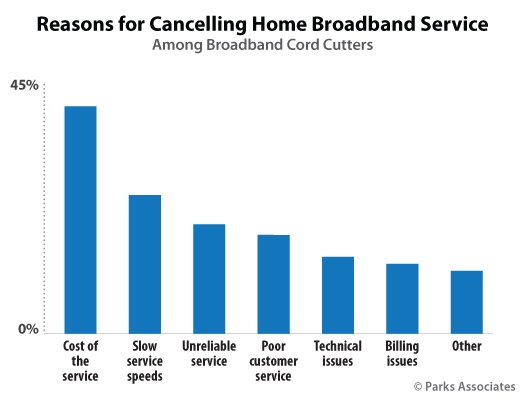 Currently 94% of all U.S. broadband households use Wi-Fi networking at home, and more than half report problems with their Internet. Parks found that “smart Wi-Fi,” or mesh networking products that would improve Wi-Fi coverage are powerful incentives to staunch churn, as 75% of households likely to switch would stay with their current provider if offered these solutions.

The study said broadband ability to deliver the necessary speeds are more critical now as 41% of broadband households were engaged in remote work or remote schooling. The increase in at-home activity has renewed consumers’ focus on their broadband speeds.

“In September 2020, 9% of broadband households had upgraded their home’s broadband service in the previous 12 months, and the COVID-19 crisis was the main reason for 80% of those upgrades,” Hanich said.