New research from Parks Associates finds cord-cutters are spending $85 per month on average for their online pay-TV or standalone subscription-based services, roughly $30 less than what they were paying for traditional pay-TV service.

The Dallas-based research firm’s Quantified Consumer: Cutters, Nevers, and the Rebundling of Video, examines consumer trends in unbundling video services and the recent phenomena of consumers re-bundling their service portfolio because of a fragmented video content marketplace.

“Cost concerns drove many consumers away from traditional pay-TV, and OTT services are delivering on the promise that they can offer desired video content at a considerably lower price point,” Elizabeth Parks, president of Parks Associates, said in a statement.

Parks said the data revealed that 47% of cord-cutters subscribe to four or more OTT services.

“In order to have an optimal video portfolio, they are creating their own video bundles by stacking OTT services,” she said. 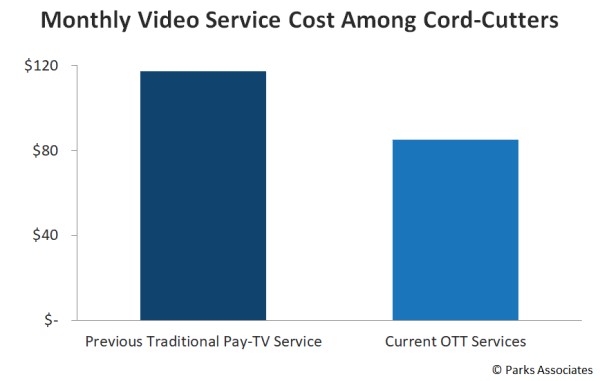 Cord-cutters currently spend nearly twice as much monthly on OTT services as cord-nevers. There are more than 6 million cord-nevers, U.S. broadband households that have never subscribed to traditional TV, and are also less likely to own key streaming video products such as smart TVs and streaming media players.

By contrast, 58% of cord-cutters own a smart TV, which is roughly equivalent to the national average, so cord-cutters demonstrate an affinity to video content and services that make them a valuable segment for providers to target, according to Parks.

“As they migrate away from traditional pay-TV, cord-cutters seek service offerings that more closely meet their video content needs with the added value of flexibility at a lower cost,” Parks said. “OTT services have to continually deliver flexibility and customization at a reasonable cost to keep these subscribers engaged and retain them on an ongoing basis.”