Despite Netflix’s subscriber base trumping or rivaling (HBO) most pay-TV services, broadcast TV still generates the majority of home entertainment consumption — among broadband households, according to data from Parks Associates.

Indeed, consumption of DVD and Blu-ray Disc content trailed the DVR and video-on-demand, while besting pay-per-view.

“As an industry, we’re embarking upon one of the most exciting and opportunistic times in the OTT and digital entertainment market,” Colin Petrie-Norris, CEO of Xumo, the Irvine, Calif.-based online TV platform.

The confab will underscore ongoing proliferation of OTT video at the expense of pay-TV (and broadcast), including changes in how content and advertising is targeted toward specific consumers. 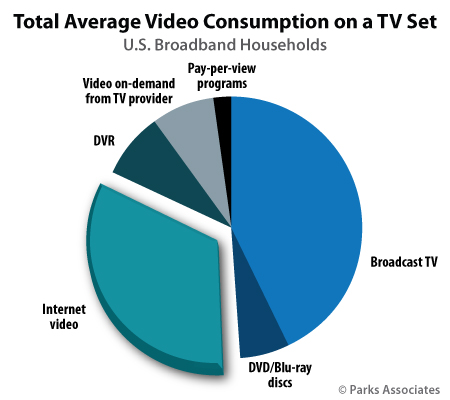