New data from international research firm Parks Associates’ new consumer study OTT: Perception, Use, and Business Models finds that 40 million U.S. internet households trialed and subscribed to at least one subscription streaming video service in the first half of 2021. The research analyzes consumer use and perception across multiple business models, their libraries, and features. 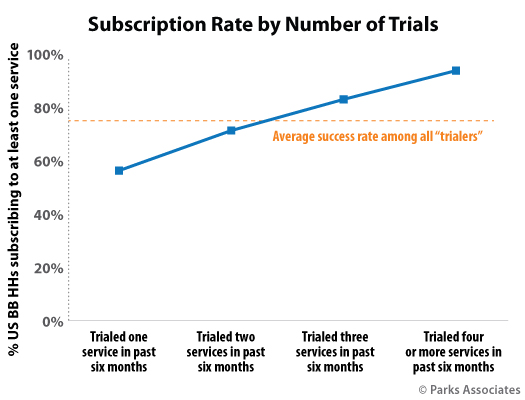 Free trials offer consumers the opportunity to experiment with different streaming services. Nearly 50% of U.S. internet households trialed at least one service in past six months, and 78% of those households ended up subscribing to at least one of these services. While major services such as Netflix and Disney+ have dispensed with free trials, smaller services find that trials turn into subscribers and help them stay competitive in this crowded market.

“Trials are an effective onboarding tool, with 40 million households trialing and then subscribing to at least one service in the past six months,” Eric Sorensen, senior contributing analyst, said in a statement. “The more services consumers try, the more they are likely to subscribe to at least one. Consumers who frequently trial different services are highly engaged video consumers in general, so services need to cater to these users.”

For consumers, content ultimately drives their decision to stay with a subscription. The large providers are planning significant content development expenditures in 2022 and beyond. For example, Netflix is set to spend more than $17 billion on content, while Disney+ has committed to spending $33 billion on programming and content.

“Low-cost barriers drive consumers to sign up for free trials, but the content will keep them,” Sorensen said. “All content creation efforts are focused on acquiring new customers and retaining those who are already subscribed by providing compelling content.”