A new Parks Associates report finds 36% of over-the-top video subscribers, roughly 32 million U.S. households, are “service hoppers,” defined as subs who switched between services and resubscribed to services multiple times in the previous 12 months. The report details the challenges in subscriber acquisition and retention and the latest developments in data and analytics used to improve business operations and better engage subscribers. 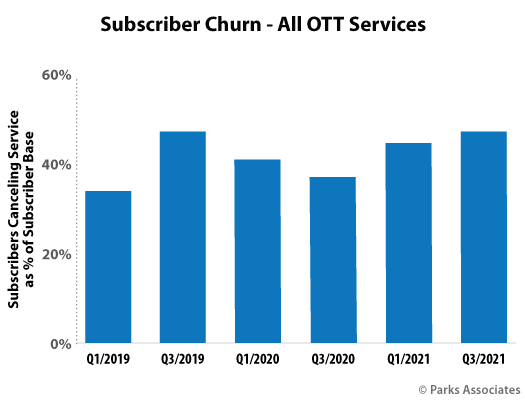 Dallas-based Parks finds that all methods where subs interact with OTT services, from subscription to platform usage, are rapidly diversifying. In the early market, households would subscribe directly via an OTT provider’s website, but the percentage of households subscribing directly via an OTT provider’s website declined from 41% to 29% between Q1 2020 and Q3 2021. Instead, households are taking multiple paths to video subscription, including through OTT aggregators, including Roku and Amazon Fire TV.

“Data collection and analysis offer new ways to attract and retain viewers, optimize revenue, and create new value,” Elizabeth Parks, president and CMO, Parks Associates, said in a statement. “Data allows vendors to identify subscribers at risk of churn and can even tag the ‘server hoppers’ who will jump in and out of services no matter what, so that providers do not waste resources chasing them in vain. Advanced data tools help companies make more informed decisions about the content and structure of their services and special offerings.”

Given the enhanced value of subscriber data, some content providers are seeking to re-establish control over their viewers — and the data about them — by not offering subscriptions via aggregators. In 2021, a substantial group of streaming households subscribed to a service via Amazon Prime Video Channels, but that percentage could drop in the future, as HBO and HBO Max were removed from the platform in September. Likewise, Disney+ is not available through major aggregators, and NBC recently announced it is moving many of its shows exclusively to Peacock and away from Hulu.