Re-opening of movie theaters and live sports events may not have that “build it and they will come” happy Hollywood ending. New data from Parks Associates finds 30% of domestic broadband households intend to avoid public events and large gatherings of people into 2021, due to concerns of exposure to the coronavirus.

Dallas-based Parks is tracking the impact of the pandemic on consumer behaviors, attitudes, and intentions in the consumer and home technology markets through multiple research projects, including the series “COVID-19: Impact on Consumer Behavior and Spending.”

Parks contends consumers have cut discretionary spending by 50%, although consumer electronics and computer purchases have increased for the first time since 2011 due to increased numbers of people working from home.

“Seventy percent of U.S. broadband households believe the economy will need a long time to recover from the COVID-19 pandemic, and only 23% believe the economy will rebound quickly once social-distancing measures are lifted,” David Drury, research director of Parks Associates, said in a statement. “With record-level unemployment and continuing uncertainty about the future … changes in consumer behavior will not reverse in the near term, with 29% delaying vacations or personal travel till at least 2021.” 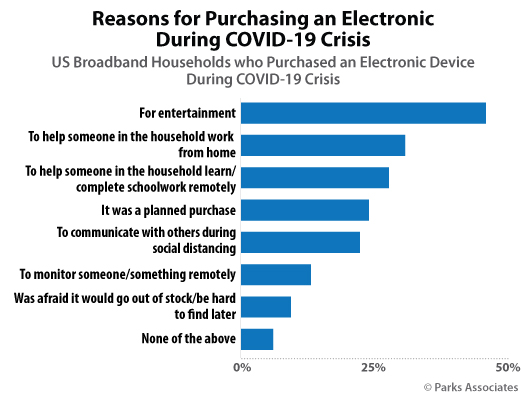 While consumers are hesitant about spending, one area with solid purchase intentions is consumer electronics and the increased consumption of video at home. During the COVID-19 crisis, 26% of U.S. broadband households purchased electronics. Parks predicts that with an ongoing global pandemic, and worsening conditions in the United States, strong demand for technology products and services will continue into 2021 and potentially even 2022, including high broadband usage at home to deliver messaging, video calling, and virtual meeting applications; video game downloads; and streaming video services.